Laterna magika celebrates with the Opening of the Springs

The National Theatre in Prague will celebrate the 60th anniversary since the founding of the world’s first multimedia theatre – Laterna Magika. It will be commemorated especially by the festive performance of the cantata Opening of the Springs by Bohuslav Martinů, which was prepared already in 1960 by the founder of Laterna magika and director Alfréd Radok together with choreographer Zora Šemberová. 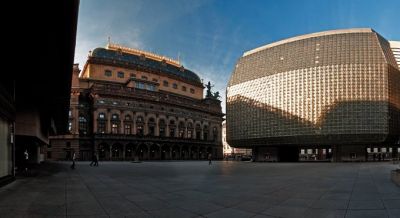 Laterna magika was founded by Alfréd Radok, his brother Emil and the set designer Josef Svoboda as a Czechoslovak program for Expo 58 in Brussels. Thanks to the great success of the program, the Czechoslovak pavilion attained the highest number of points and was awarded the Gold Star. In 1960, artistic director Alfréd Radok of Laterna magika planned to stage Martinů’s Opening of the Springs, but that was not allowed by Minister of Culture Václav Kopecký and Radok eventually resigned because of the ban. Laterna magika had to wait six years for the cantata to be premiered there.

In 2003, the Czech Television and Bohuslav Martinů Foundation decided to reconstruct the original version from 1960 in cooperation with choreographer Zora Šemberová. This reconstructed version has been performed only twice, and it will be the third time on April 28th at 8.00 pm in the New Stage of the National Theatre in Prague.

More information about the performance here.