When Bohuslav Martinů composed his Three Songs after Poems by Guillaume Apollinaire, (H 197) in 1930 for the singer Anna Pečírková, he probably did not foresee that the songs would be lost three times over in the following years - and that they would be found again three times. The first loss occurred in 1933, a few days before the first performance, but the songs were successfully discovered in time for Pečírková and her accompanist Václav Štěpan to perform them as planned in Prague’s Mozarteum. The manuscript was lost for a second time in 1944, when the Gestapo burst into Anna Pečírková's flat. The manuscript and other things belonging to her were packed up; she herself was taken to Terezín and later to the concentration camp at Ravensbruck. Fortunately, all turned out well and she survived the war. Miraculously, Miloš Šebánek discovered the manuscript in a second-hand bookshop after the war and brought it back to Pečírková. It was lost for a third time when the singer loaned it to Miloš Šafránek in 1949 and he failed to return it. In the end, the three songs were discovered last year in the estate of Czech choirmaster Miroslav Košler, later to be purchased by the Bohuslav Martinů Foundation.​ 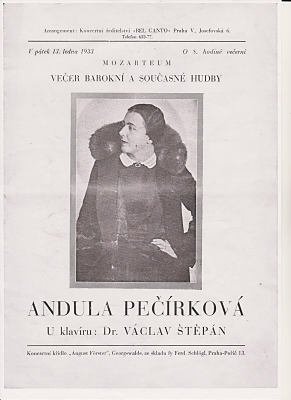 On the occasion of finding these songs, we unlock the article by Eva Žižková from Martinů Revue 1/2017 which maps the fate of the lost songs.

In 1930, Bohuslav Martinů wrote the Trois mélodies sur les poèmes de Guillaume Apollinaire (Three Songs after Poems by Guillaume Apollinaire, H 197). He dedicated the three songs to Andula Pečírková, a concert artist and promoter of modern Czech and international songs. Their premiere was scheduled to be given in 1933 within an “Evening of Baroque and Contemporary Music” at the Mozarteum, with Václav Štěpán accompanying Pečírková on the piano. The concert took place on 13 January – yet Martinů’s songs were very nearly dropped from the programme. 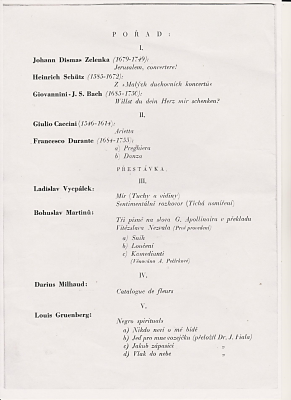 During the preparations for the premiere, Andula Pečírková decided that she would perform the piece in Czech translation. As she put in the draft of her letter: “The translation was enthusiastically undertaken by Vítězslav Nezval, whom I had engaged for the task through the architect Feuerstein. I gave the manuscript to Nezval myself, and the great poet disappeared with it for a number of weeks. No one knew where he was, it seemed that he had vanished into thin air. The evening at which the songs were to be performed was quickly approaching. Express registered letters and despatches were sent to all the places where the poet may have been staying, but to no avail - he was simply incommunicado.” That was when the manuscript went missing for the first time. In desperation, Pečírková even sent a telegram to Martinů in Paris, in which she probably asked him to send a copy of the songs. The composer was startled by the singer’s request and in a letter dated 7 January 1933 he wrote to her that he possessed neither the manuscript nor the sketch, adding that he could no longer even remember the songs.

“One day before the concert, when Dr. Štěpán and I had to replace the songs already announced on the posters, I was urgently summoned to the Metro café (B. Feuerstein’s letter). Having no inkling whatsoever of who or what had called for me, I entered the café. I saw three men bent over the sheets of a music manuscript - they were Iša Krejčí, B. Feuerstein and V. Nezval. While Feuerstein was translating the text from French, Nezval was rewriting it into Czech verse and Krejčí was checking the conformity with the music notation. Just as I approached the table at which the three artists were sitting, the great poet was adding the final word of the final stanza of the final song to Apollinaire’s poetry.”
In the end, the Trois mélodies did receive its world premiere on 13 January 1933, as planned.

Martinů’s three songs went missing for the second time owing to the Nazi secret police’s rampage in Pečírková’s flat following her arrest in February 1944, when she was detained at the Pankrác prison in Prague, subsequently confined at the Terezín concentration camp and finally transferred to Ravensbrück. The Gestapo pilfered from the singer’s apartment, and her extensive archive, including the manuscript of Martinů’s songs, disappeared. Although Pečírková did fortunately survive the war, she returned home in poor health and mentally scarred. Thanks to Dr. Václav Holzknecht, she was able to assume a post at the Prague Conservatory, where she taught solo singing and, later on, secondary piano.
The fate of Martinů’s Trois melodies is further elucidated in the draft of a letter, in which Pečírková wrote: “Following the liberation, the manuscript was miraculously discovered in piles of second-hand sheet music by Mr. Šebánek, who, to my great pleasure, gave it back to me. Ever since that moment, I had maintained it with loving care – that is, until the day, when Mr. Šafránek coaxed me into lending it to him – for two days. Grudgingly – but feeling the obligation to help the B. M. biographer – I delivered the manuscript to Mr. Šafránek, trusting his honest intent. Yet since that time almost eight years have passed and, notwithstanding reminders sent to him by myself, my musician friends, as well as the Music Fund, he has failed to return the manuscript to me. He does not respond to letters, he hides from me, and when I happen to encounter him and speak to him, he scurries away without a word.” Miloš Šafránek borrowed the manuscript in circa 1949 (as documented by his letter dated 5 April 1949).

Well, that was how the autograph of the Trois mélodies went missing for the third time. Andula Pečírková would never see the sheet music again. She died in 1983. The singer forfeited not only Bohuslav Martinů’s but also Vítězslav Nezval’s manuscript. In 2003, a copy of one of the cycle’s songs – Saltimbanques – was found by the mezzo-soprano Olga Černá. Accompanied on the piano by Jitka Čechová, she recorded it for Naxos. Černá also performed the piece in 2004, at the Bohuslav Martinů Festival, together with other songs by the composer. Today, we have no idea where the manuscript may be. Will it ever be unearthed? And will it ever get to where it belongs – the Bohuslav Martinů Memorial in Polička? That is actually what Andula Pečírková wished, as documented in the draft of her letter addressed to the Ministry of Education and Culture. “I have heard that, with great care, the Ministry of Education and Culture has been gathering all the available materials relating to the late composer, above all the manuscripts of his works ... In the case that the songs happen to be found, I would like to ask you for the permission to copy them before they are deposited, hopefully for good, in peace and safety, in Bohuslav Martinů’s birthplace.” And, naturally, this would also please the author of the present article.