Gennady Rozhdestvensky has passed away at the age of 87 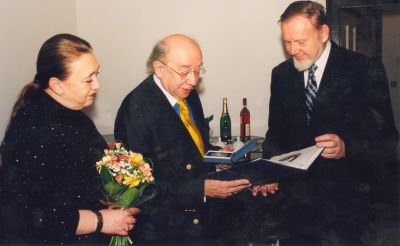 Gennady Nikolayevich Rozhdestvensky was born on May 4, 1931 in Moscow into a musical family. He studied conducting with his father at the Moscow Conservatory and piano with Lev Oborin. During his career, he worked as a chief conductor of the BBC Symphony Orchestra, the Vienna Symphony Orchestra, the Royal Philharmonic Orchestra in Stockholm, or as a chief conductor of the Bolshoi Theatre. He has promoted works by foreign composers not well known in the Soviet Union, such as Paul Hindemith, Carl Orff or Bohuslav Martinů.

"In 1956 I studied for six months in Prague, where I attended Ančerl's rehearsals, and for the first time I heard the Fourth Symphony by Bohuslav Martinů. The first score of a Bohuslav Martinů’s piece I actually held in my hands was the Memorial to Lidice, and these two works brought me to Martinů. In Moscow I later introduced a cycle of all his symphonies."

During his frequent stays in Prague, Gennady Rozhdestvensky performed works by Leoš Janáček, Hector Berlioz, Bohuslav Martinů or Dmitri Shostakovich. In 1962 he first conducted at the Prague Spring Festival, where he performed at the closing concerts as well in 1974 and 2007.

May he rest in peace.