Special about the Russian premiere of the Greek Passion, the obituary of a legend Gennady Rozhdestvensky, reviews on Juliette in Wuppertal, or an article about how Martinů spent his holidays. The new issue of the magazine Martinů Revue is out and as always contains news, interviews, articles and reviews related to the Czech composer Bohuslav Martinů and his work. 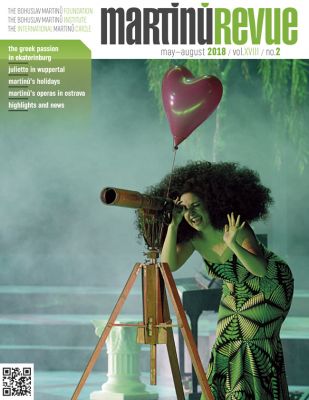 In the second issue of the 2018, you will find passionate reviews on historically first staging of the Greek Passion in Russia. Ekaterinburg State Academic Opera and Ballet Theatre premiered the first version of the opera in April, with Thaddeus Strassberger as a director and the current Chiefconductor of the Ekaterinburg Opera Oliver van Dohnanyi as a conductor of the production. Slovak conductor was interviewed for the current issue of Martinů Revue by Aleš Březina, director of the Bohuslav Martinů Institute. Von Dohnanyi has for example revealed, why they chose this opera: „We wanted to find an opera that would address a current theme – that would portray something which happened in the past, which still occurs in our time and may well be important in the future.“

Great deal of promotion of Martinů in Russia was also done by legend of conducting Gennady Rozhdestvensky, who passed away in June. The new Martinů Revue brings an obituary in which Rozhdestvensky and his first encounter with Czech composer’s music is remembered: “In 1956 I studied for six months in Prague, where I attended Ančerl’s rehearsals, and for the first time I heard the Fourth Symphony by Bohuslav Martinů. The first score of a Bohuslav Martinů piece I actually held in my hands was the Memorial to Lidice, and these two works brought me to Martinů. In Moscow I later introduced a cycle of all his symphonies.”

The holiday issue of Martinů Revue also brings an article about the holidays of Bohuslav Martinů. About how he once spent it in Czechoslovakia and above all in his native Polička, writes musicologist Monika Holá from the Bohuslav Martinů Center. She also writes about significant event which took place at the end of March, when Town Museum and Gallery Polička received an unique gift - a complete set of original letters written by Bohuslav Martinů to his friend Frank Rybka. The descendants of a composer's friend living in America have decided to dedicate letters to the museum.

Find out more in the current issue of Martinů Revue, which is available here.