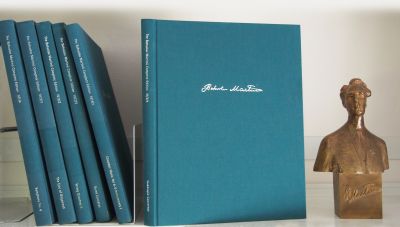 "To tell the truth, I'm a concerto grosso type," Martinu wrote in 1945. Unsurprisingly, the concerto grosso is also the formal basis of both concertante compositions for four solo instruments and orchestra included in the "Quadruple Concertos" volume. The works were written nearly twenty years apart and are quite different in style, having been inspired by various influences: Handel and Haydn, the Baroque period, and Classicism. The considerable time gap between the compositions is also evident in Martinu's compositional technique, which transformed fundamentally throughout the decades.

The sixth BMCE volume includes an extensive preface describing the genesis of the works, the circumstances of their first publication, and their historical reception in the context of the composer's oeuvre, as well as a detailed critical report by the editors. The facsimile section provides high-quality reproductions of musical and non-musical sources, which document selected editorial issues, historical performance practice, and abandoned versions.

"Quadruple Concertos" is the last editorial accomplishment of brilliant Martinu expert and world-famous conductor Christopher Hogwood – a work that he collaborated on during his many years of research on Martinu.