Violist prof. Lubomír Malý, who recently celebrated his 80th birthday, was given the Bohuslav Martinů Foundation Medal during the Bohuslav Martinů Days Festival 2018 press conference. The Bohuslav Martinů Medal is handed over to prominent figures who have promoted Martinů's music and legacy. Among those who are awarded are, for example, Rudolf Firkušný, Zuzana Růžičková, Jiří Bělohlávek or Charles Mackerras. 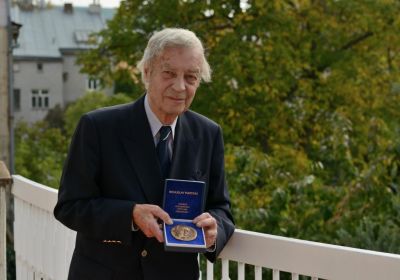 Prof. Lubomír Malý was born on March 6, 1938 in Prague. He studied at the Prague Conservatory, then he continued at the Academy of Performing Arts. He is the winner of an international competition in Helsinki in 1962. He was a principal viola player of the Czecho-Slovak Radio Symphony Orchestra or a soloist of the Prague Symphony Orchestra. Since 1978 he is a professor at the Academy of Performing Arts in Praguehe has been teaching at HAMU in Prague. He has performed Martinů’s compositions on more than several hundred occasions, especially his Sonata for Viola and Piano.

This year, conductor Petr Vronský will also be awarded the Medal of the Bohuslav Martinů Foundation during a gala evening on December 14 at the Martinů Hall.