New recording of What Men Live By prasied in reviews

Just a few days after the release of the opera recording What Men Live By, the album is taken into notice by Czech and foreign reviewers. The one-act opera by Bohuslav Martinů, performed by the Czech Philharmonic, Jiří Bělohlávek and others, was awarded Recording of the Week by Presto Classical, and the Czech Radio Vltava called it Album of the Day. 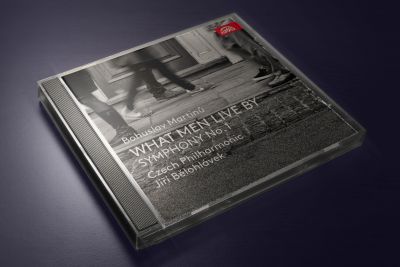 "Bělohlávek gets the balance between solemn religiosity and rustic energy just right – witness the bucolic, whooping horns as day dawns on the frigid little workshop, or the pungent harmonica wielded by the cheeky apple-thief. The vocal soloists capture the speech-song quality which Martinů wanted to perfection rather than approaching the piece like scaled-down verismo (though the full-blooded lyricism which alto Ester Pavlů brings to the Old Woman’s little arietta is also a joy); that the English pronunciation (particularly from Ivan Kusnjer’s Martin) is idiosyncratic only adds to the overall atmosphere and charm." Katherine Cooper (Presto Classical) - Jiří Bělohlávek conducts Martinů's What Men Live By

Find out more about the album.