Since his debut in 1985 the violinist Frank Peter Zimmermann has been one of the guest artists to regularly and frequently perform with the Berlin Philharmonic. Over the years he has interpreted all the major violin concertos with this ensemble. But what is more, he has also peppered his repertoire with less-known compositions. With rare works that deserve to be rediscovered. This season he is playing Bohuslav Martinů’s Violin Concerto No. 1 under the direction of Jakub Hrůša. We asked Frank Peter Zimmermann to tell us a bit about the wonders and challenges of the composition. 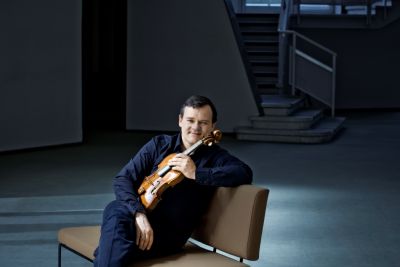 Martinů is one of the greatest composers of the twentieth century. Why are his violin concertos performed so rarely?
Martinů has his own peculiar musical voice. His music defies simple categorisation because it is very dynamic. At times impressionist, at times expressive, at times very rhythmical, and then very vocal and lyrical. It eludes any kind of stylistic classification. Add to that the Czech idiom of Martinů’s music: Czech dance rhythms with complex shifts of metre! Those are hard to execute.

You already played his Violin Concerto No. 2 with the Berlin Philharmonic in 2012. Now you are interpreting his first concerto. What differences are there between the two?
The second violin concerto follows the tradition of the great Romantic concerto. Martinů wrote it in his American exile in 1943 for Misha Elman, a violinist of “the old school”. Martinů’s first violin concerto, composed ten years earlier in Paris, is completely different: Martinů was engrossed in the works of Igor Stravinsky. The influence of the Russian composer is especially notable in the first and last movements. The concerto was written for Samuel Dushkin, a musician who was in close touch with Stravinsky and premiered his violin concerto. Besides that, Martinů also studied the Baroque form of concerto grosso in the 1930s, and you can sense that in his first violin concerto as well.

How much does it show that the concerto was written for Samuel Dushkin? Are there some passages that are typical of his violin play?
Dushkin and Martinů conducted a lively exchange of opinions. The violinist was not easily satisfied, because he wanted his part to be as virtuosic as possible. This is evidenced by the triple-stop passages. To achieve this sound, you have to push the bow very hard against the violin. To me, it feels almost like my instrument was being “raped”. And then there are many fourth intervals and extremely long jumps up to the thirteenth, fourteenth position. To hit the right note spot on, that’s almost like winning the lottery (laughter). I think these large interval jumps were also Dushkin’s idea. By the way, Dushkin never actually played the concerto in the end. The score was lost and only re-appeared decades later. It was premiered in 1973 by Josef Suk. And I must add that Martinů was a professional violinist himself.

How did that fact affect the composition of the violin concerto?
That’s the beautiful thing about it! The interpreter immediately recognises that this concerto was written by a violinist. Despite all the difficulties, it is conceived in a very “violinist” manner. It is pure joy to play.

What do you like the best about the concerto? What is the greatest challenge for you?
I listened to this concerto when I was thirteen, from a recording with Josef Suk, and I was immediately fascinated by it. Its unbridled Czech musicianship is thrilling. That is also its challenge to us who interpret it. All of us – be it soloist, conductor, or orchestra – must master the complex rhythms and frequent changes of metre, or else risk the whole thing coming apart. I practised these risky sections with utter pragmatism with the aid of a metronome.

What kind of interplay does the concerto create between the soloist and the orchestra?
The orchestra must play in a very clear and light manner. This violin concerto should be interpreted almost as a Baroque composition.

What are you looking forward to the most?
Performing with the Berlin Philharmonic is always the crowning moment of the season for me. I am proud and happy that together we can perform a work we have never played like this before. The last time the orchestra played this concerto was with Josef Suk in 1980.