Miloslav Bureš, author of the text for the Opening of the Springs, passed away fifty years ago

On November 12th, fifty years ago, Czech poet Miloslav Bureš has passed away. Born in Polička, Miloslav Bureš was close friend of Bohuslav Martinů, whom he visited in 1957 and 1959 in Italy and Switzerland. Bureš's texts were used by Martinů for his four cantatas: the Legend of the Smoke from Potato Tips, Mikesh from the Mountains, a Dandelion Romance and one of his most prominent compositions Opening of the Springs, which he dedicated to Miloslav Bureš. 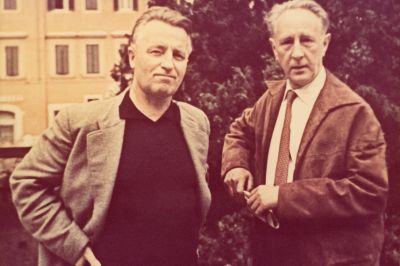 Miloslav Bureš (6. 11. 1909, Polička - 12. 11. 1968, Prague) was a poet, writer and editor. In his youth he studied high school in Polička and then at the Faculty of Philosophy of Charles University. He worked as an editor of the Severočeský deník, Czechoslovak Radio, in the Prague publishing houses Melantrich, Práce a Osvěta. Between 1951 and 1955 he served as an official in the ministries of information, education and culture, then he worked in the editorial offices of Svobodné slovo or Zítřek. Besides poetry collections, he also wrote novels, short stories and fairy tales for children. His work reflects a strong love for his native land, nature and folk traditions.

"Your poem about the Well has touched me deeply not only because you love the High Lands but also because it is beautiful. Ih has evoked many memories - and dear ones, too. Of course, I'm writing music with the use of it; so beautiful text is not found every day," writes Bohuslav Martinů in a letter to Miloslav Bureš in July 1955.

A year ago, the four cantatas on texts of Miloslav Bureš were released in the critical edition from Bohuslav Martinů Complete Edition (ed. Vít Zouhar). With accordance to it, the Prague Philharmonic Choir, choirmaster Lukáš Vasilek and the soloists, recorded an album released by Supraphon. The album has recently received a nomination for the BBC Music Magazine Award and was named Editor's Choice in two British music magazines: Gramophone and BBC Music Magazine.