A new book, which deals with Martinů's musical philosophy, is out

Martinů's Subliminal States: A Study of the Composer's Writings and Reception, with a Translation of His "American Diaries" is now released by Boydell & Brewer publishing house. In the book, the author Thomas D. Svatos describes the political, cultural, and musical challenges that Martinů faced. The book also offers, for the first time, a translation of the composer's American Diaries, in which he set down his musical philosophy. The book is now available with 40 % discount (until next Wednesday). 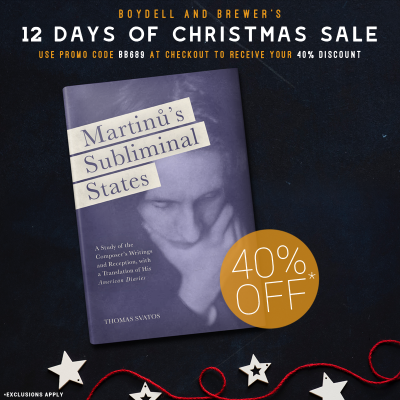 „Martinu's diaries are, in large measure, a quest to establish a new kind of discourse on music. In place of the Romantic sentiment that he found others invoking to explain musical inspiration, Martinu suggested looking for "emotion" elsewhere, such as in the technical decisions a composer makes while producing the score, or even in the composer's ability to work "without conscious involvement." And in place of the schematic formal analyses that he felt were misleading listeners about a work's "musical structure," he urged that we treat the work as a Gestalt, or as a synergy of functional relations. Martinu's diaries provide a unique contribution to the history of musical aesthetics and shed light on a composer who loomed large in the musical worlds of Europe and America.“ (Boydell & Brewer)

The author of the new book Thomas D. Svatos is an Assistant Professor in the Department of Interdisciplinary Studies at Zayed University-Abu Dhabi. Order the book with 40% discount here: www.boydellandbrewer.com/martinu-s-subliminal-states-hb.html