Frank Peter Zimmermann will perform Concerto for Violin and Orchestra No. 1 in Prague

The final concert of the Bohuslav Martinů Days Festival, which will take place on December 19th at 7.30 pm in Rudolfinum, Prague and again on December 20th and 21st, will offer the performance of the Czech Philharmonic led by Jakub Hrůša. The concert’s main star will be violinist Frank Peter Zimmermann, who performs the Concerto for Violin and Orchestra No. 1, H 226 by Bohuslav Martinů. The Czech Philharmonic will also perform Arthur Honegger's Christmas Cantata, Te Deum by Antonín Dvořák and the world premiere of the composition of Jiří Gemrot Resurrection of Light and Hope. 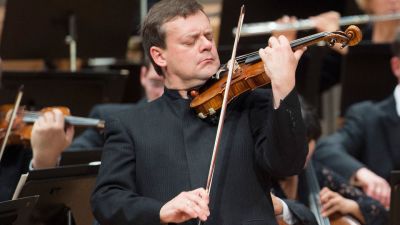 „Martinů has his own peculiar musical voice. His music defies simple categorisation because it is very dynamic. At times impressionist, at times expressive, at times very rhythmical, and then very vocal and lyrical. It eludes any kind of stylistic classification,“ says Frank Peter Zimmermann on Martinů. It won’t be his first cooperation with conductor Jakub Hrůša. They already performed Martinů’s Concerto from 1933 in September with Bamberger Symphoniker and in October with Berliner Philharmoniker, with whom Hrůša made his debut. „I listened to this concerto when I was thirteen, from a recording with Josef Suk, and I was immediately fascinated by it. Its unbridled Czech musicianship is thrilling. That is also its challenge to us who interpret it,“ adds famous German violinist to the Martinů’s Concerto (Full interview).

The concert will be broadcasted live on December 21st at 7.30 on Czech Radio Vltava.