Graham Melville-Mason has passed away

On February 2nd, Czech music and Bohuslav Martinů lost one of their most important foreign promoters. At the age of 85, the British musicologist, journalist and music organizer Graham Melville-Mason has passed away. He has led for many years the British Dvorak Society and worked as an honorary adviser of the International Music Festival Prague Spring. May he rest in peace! 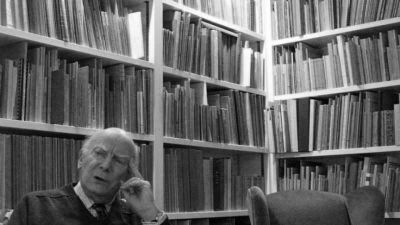 The sea there is just as blue as any other, except that it leaves little black pieces of coal on the shore. That shore is in the north-east of England, not too far from the Scottish border, just past the little town of Alnwick, which boasts a major landmark – an old, inhabited castle that supposedly served as a set for the Harry Potter films. Just a few miles down the road, a stone’s throw away from the foaming waves of the North Sea, stands a house that is the home of a certain musicologist and his wife. That man is Graham Melville-Mason, who has been inseparably linked with the Prague Spring International Music Festival for the past more then twenty years. He was made an advisor to the festival in 1990 and personally attended its concerts every year until recently. And to Czech classical music as such, he has been a valued friend, expert, supporter, and sympathiser for much, much longer.

Czech music has a rich following in Britain, comprising both experts and amateurs who are active in the Dvořák Society for Czech and Slovak music. But Graham Melville-Mason clearly stands out from the rest. This scholar, writer, and promoter of music celebrates his 85th birthday this year. He headed the Dvořák Society for many years and then became its patron, and he continues to be active in the organisation even today. He is also well-known by musicians and organisers of concerts. Many, perhaps most, guest invitations to Czech soloists, chamber ensembles, and conductors to perform on the British Isles in the past decades have his inconspicuous support to thank.

The Dvořák Society, established in the Year of Czech Music in 1974 and boasting a membership seven-hundred strong, organises lectures, meetings and debates with Czech musicians all over Britain; it holds concerts of young Czech artists studying in the United Kingdom; it awards Czech and Slovak students with scholarships to the prestigious Dartington International Summer School; it publishes books and booklets; it also initiated a collaboration with the National Museum in Prague to create an international database of sources on Dvořák; and last but not least it started a fund for the reconstruction of Dvořák’s villa Rusalka in Vysoká near Příbram… Another of its prominent members was Charles Mackerras, a pupil of Talich and a promoter especially of Janáček’s operatic oeuvre but also of the music of other Czechs, from the old masters to Martinů. 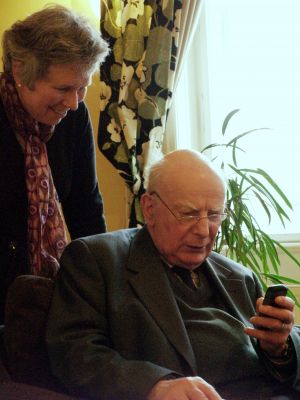 For Graham Melville-Mason, everything began back in the 1960s, when he taught at the university in Edinburgh and helped organise the city’s international music festival, where he first experienced guest performances of Czechoslovak musicians. His fascination with the Czech musical culture continued to grow and strengthen when he was employed at the BBC in London. Czech music finally became the main focus of his professional and personal life following his retirement in 1989. He dedicated himself to the works of Czech masters and key contemporary composers; he maintained and continues to maintain numerous friendships with Czech musicians. And so it is clear that there have been few major guest appearances of Czechs in Britain that he would not have known of and even fewer performances of British artists at Prague Spring that he would not have somehow had a hand in.

He studied and still studies Czech culture, he drove a Škoda and can speak Czech. Before he and his wife moved far north into the countryside, Graham could regularly practise his understanding of the language while taking his dog for a walk with his neighbour in northern London – the exiled Czech composer and journalist Karel Janovický, who led the Czechoslovak section of the BBC World Service for many years. For many years passers-by were notified of Mr Mason’s exotic interest by a red street sign behind the ground-floor window of his typical terraced brick house, which said “Besední”; it was a real Czech street sign. It was a surplus sign from when new signs had been installed in the streets of Prague’s Malá Strana neighbourhood, and Graham’s Prague friends had light-heartedly presented it to him as a keepsake. Besední Street was the address of the Czech Music Fund…

Although you cannot see the sign from outside the house where he lives now, he still has it, of course. His Czech sympathies are expressed less conspicuously, but clearly enough for those in the know: the house number – three – is marked by a typical blue Prague number plate. And inside? As many discs and scores with the works of Czech composers as you might find in the Czech National Museum…

Comfortably seated in his office, surrounded by shelves crammed with music, Graham reminisced during a radio broadcast a few years back: “There were several important moments in my life. But one of them, which relates to Czech and Slovak music, is key – a fellowship I received in 1975 to fund study trips abroad. It was my travels that led me to take a profound interest in music and to enter into equally profound personal friendships – with both famous and ordinary people. And I am very, very grateful for that, because those are things that have fundamentally enriched my life and continue to do so. The consequences have been beyond anything I could ever have imagined when I first considered applying to the Churchill Foundation for a travel grant. From my first moments beyond the Iron Curtain, I was fascinated by Czech and Slovak initiatives that led me to make so many different friends. Although some of them have since passed away, I have the most beautiful memories of them, and I am grateful to them for many things.” He summarised the past decades thus: “I had an interesting life with few hardships. Of course, there will always be something you wish would have turned out a bit differently. For various reasons. Some of it is important, some of it is not. But I cannot complain, my life seems to be balanced.”

His health no longer permits him to travel, and so he cannot even attend the Prague Spring Festival any more. But the connections to Czech culture are still there – phone numbers, Skype accounts, new recordings, articles on the internet… And in his seclusion, fully committed to the care of his wife, Graham is grateful for the winding paths of his life that led him from the study of medicine to music, from dry land to a navy submarine, later from Britain to the Continent, from Western Europe to the east… From Scotland to England… and now, in his retirement, back north again. To where the sea is blue but leaves black pebbles of coal on the sandy beach.