The eminent Czech violinist Bohuslav Matoušek is releasing a set of four CDs with Bohuslav Martinů’s complete concert works for violin and orchestra, care of London-based Hyperion Records. The compositions were recorded in collaboration with the Czech Philharmonic conducted by Christopher Hogwood. 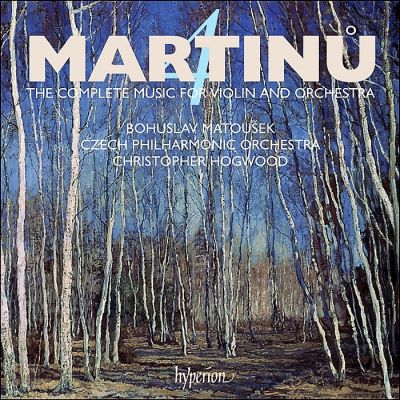 The roots of this extraordinary project, which stars the Czech violinist Bohuslav Matoušek as protagonist, soloist, and producer, go back to 2002–5. The first CD of the series was released by Supraphon in 2002 and was acclaimed as the best Czech recording of the year by the Czech magazine Harmonie. The series was later taken up by one of the largest global labels, Hyperion Records in London, which released the four albums individually in the course of 2007–8. All four CDs received lavish praise from critics around the world and garnered numerous major international honours (Gramophone Choice…). The recordings were made in collaboration with the famous conductor and musicologist Christopher Hogwood, who consistently promoted the music of Martinů and was also a member of the editorial board of the Bohuslav Martinů Complete Edition and spent the last years of his life preparing its seventh volume, with Martinů’s Quadruple Concertos, which was published last year.

‘Christopher Hogwood and Bohuslav Matoušek are entirely at home with this repertoire: there is a wealth of interpretative details, but what impresses most is the bigger picture and strong sense of where Martinů is going … in this clear recording there is a huge amount to enjoy’ (BBC Music Magazine)

The releases have sold more than 19,000 CDs worldwide, which is a rare feat for albums with classical music. Hyperion is commemorating the 60th anniversary of the death of Bohuslav Martinů and Bohuslav Matoušek’s 70th birthday by releasing the whole series again on 1 February 2019 as a single set of four CDs, which is a considerable boost to the recordings and their international impact. The Bohuslav Martinů Foundation cooperated extensively on both the initial releases and the present re-edition.

You can listen to the recording on the Hyperion Records website.