Three renowned artists – the soprano Martina Janková, the baritone Tomáš Král and the pianist Ivo Kahánek – made a recording of Bohuslav Martinů's Songs for Supraphon which was released in February. We asked Martina Janková a couple of questions about the new release, about the co-operating artists as well as about her plans for the future. 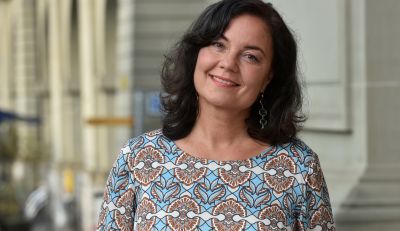 Mrs. Janková, is the new album of Bohuslav Martinů songs a logical follow-up to your Janáček record?
Yes, it is actually a dream come true. After our album of Janáček songs met with acclaim on the part of the audience and critics in Europe and the USA, I had the idea of making a “sister” recording.

Back during my time of studies in Basel, I was approached by the musicologist Aleš Březina, who drew my attention to Martinů’s 1920 cy¬cle New Slovak Songs, not overly known and scarcely performed. The other three sets, Songs on One Page, Songs on Two Pages and The New Chapbook, written in the 1940s during the composer’s exile in America, thus form an arch.

What is your personal relation to Bohuslav Martinů’s music?
I would say that I have a lot in common with Martinů. Just as he did, I have lived abroad for a long time. My second home is Switzerland, where the composer spent the final years of his life and died. And just like Martinů, I don’t want to forget about my roots, which I have keenly embraced. So I understand his desire to get back to these roots.

You have mentioned the time that divided the creation of the Martinů songs featured on the album. What differences do you perceive in terms of their compositional style?
I think that at the age of 29, when he wrote his first pieces, he had yet to refine his idiom. The piano accompaniments dating from his early period, for instance, are quite wild, difficult to play. His late songs, on the other hand, serve as prime examples of his compositional mastery. They are wonderful miniatures, devoid of effects and focused on the essence. In his mature phase, Martinů strove to attain profundity, which is clearly palpable in the songs.

How challenging is it to comprehend the songs in their entirety given their brevity?
That is precisely what inspires me. Each of them encompasses people’s stories in their entirety. As in the case of Janáček’s songs, Martinů’s mini¬atures compendiously express the substance of human life. I deem their perspective and synthetic nature to be extremely important.

Could you introduce the artists with whom you have made the album?
The pianist Ivo Kahánek contacted me in 2009, when I was appearing at the Prague Spring festival with the pianist Gérard Wyss, performing a programme made up of Haydn’s music, within which – besides his early German songs and mature English Canzonettas – we presented the composer’s arran¬gements of Scottish, Welsh and Irish folk songs. Ivo Kahánek was highly intrigued by the songs and suggested that we work together. And this year, our shared penchant for songs gave rise to the idea of holding the Song Academy at the chateau in Liteň, where within the Jarmila Novotná Festival Ivo Kahánek, Gérard Wyss and I will focus on global and Slavonic songs, which our students and we will present at the Suk Hall of the Rudolfinum on 20 September 2019.

Ivo Kahánek is a fabulous pianist, and we were seeking a special repertoire we could perform together. He and I have identical roots, so it was logical for us to begin with Janáček and continue with Martinů. We have also devoted to Chopin and his lesser-known songs. The next project of ours will entail 18th–century songs.

When it comes to the baritone Tomáš Král, he was recommended to me by Tomáš Luks, when I was planning to make the previous album. Tomáš is a Moravian too, a Brno native, and his musicality draws upon the cimbalom tradition, as is the case of Ivo Kahánek and me. We are three Moravians, who are able to “read between the lines” the rhythms that are difficult to write down.

What position do songs in general have in your repertoire?
I must admit that songs are my true passion. Every year, I try to put together two new programmes made up of songs. Regrettably, owing to my opera and concert engagements, which annually lead me to eight countries all over the world, I cannot pay as much attention to them as I would like to. I must, however, add that preparing song recitals is far more demanding and time-consuming that opera productions. Ivo Kahánek, Gérard Wyss and I have collaborated on a regular basis. I am also interested in 21st–century songs, on which I would like to work with the musicologist and composer Aleš Březina. 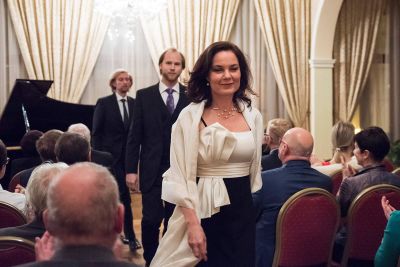 Could you tell us what is currently your most demanding engagement?
At the present time, I am singing at the Theater an der Wien in Vienna in a production of Purcell’s King Arthur, a semi-opera, consisting of a great deal of spoken text in German, performing alongside the best actors from the Burgtheater, a Mecca of German-speaking drama. It was a great challenge for me, yet in the end they have praised my natural acting and accent-less pronunciation. But Purcell’s piece also contains sung passages in English. The production is conducted by Stefan Gottfried, who over the long term has collaborated with Nikolaus Harnoncourt, and it features the Concentus Musicus Wien ensemble and the Arnold Schönberg Chor.

What other engagements will follow?
In March Gérard Wyss and I are scheduled to premiere in Switzerland a new song programme. Then I will visit Brazil, where I will sing in St Matthew Passion under the baton of the brilliant Nathalie Stutzmann, who was originally a singer and now has been a conductor for a decade or so. I really look forward to returning to the Cleveland Orchestra, with whom, conducted by their music director Franz Welser-Möst, I will perform Schubert’s Mass in E flat major. And I am happy to come back to Prague, where I will be giving a concert with Barbara Maria Willi. At the end of the season, I will again appear at La Scala in Milan, singing in Mendelssohn’s Sym¬phony No. 2, “Hymn of Praise”.

There is no doubt that musicians have many dreams and think of projects they would like to materialise. Could you tell us what you would like to include on your next album?
Ivo Kahánek and I have many ideas, yet we will see which of them will come to fruition.

Find out more about the album here.