Angel Award goes to the album with What Men Live By and Symphony No. 1

The Czech music Angel Award announced this year a new “Classical music" category hto honor the best classical album of the previous year. During yesterday's ceremony, this award went to the recording of the pastoral opera What Men Live By and Symphony No. 1 by Bohuslav Martinů. The Supraphon album, which was recorded by the Czech Philharmonic, Martinů Voices, choirmaster Lukáš Vasilek, soloists Ivan Kusnjer, Petr Svoboda, Jan Martiník, Lucie Silkenová, Ester Pavlů, Jaroslav Březina, Lukáš Mareček, and narrated by Josef Špaček, was the last Martinů recording of the famous conductor Jiří Bělohlávek. 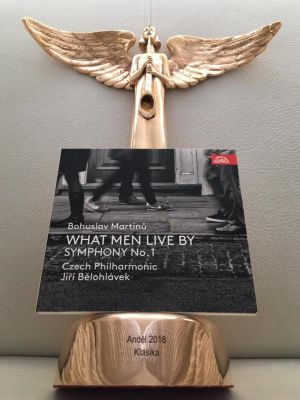 At the 28th annual awards of the Czech Music Academy in the Karlín Forum in Prague, the prize was accepted by concert master of the Czech Philharmonic Jiří Vodička and soprano Lucie Silkenová. "I would like to thank for this beautiful statuette, which we have always seen on television. Now, classical music has come here and we are very happy about it. In addition to my colleagues, musicians, the entire management, and the whole team who helped us with this success, I would like to thank and send this Angel to our former Chief Conductor, Jiří Bělohlávek," said violinist Jiří Vodička during the ceremony.

In recent months  the recording, which was financially supported by the Bohuslav Martinů Foundation, has been collecting awards both home and abroad. Such honors include prizes awarded by Choice of the Harmonie magazine, Recording of the Week by Presto Classical, Diapason Découverte awarded to the rare discoveries, and Disc of the Month by Opera Magazine.