The Plays of Mary at the Smetana's Litomyšl

Tonight, performace of the opera The Plays of Mary by Bohuslav Martinů will take place at the Smetana's Litomyšl International Opera Festival. The opera will be staged in the successful production of Janáček's Opera of the National Theater in Brno. The performance will take place in the castle courtyard from 9.30 pm. 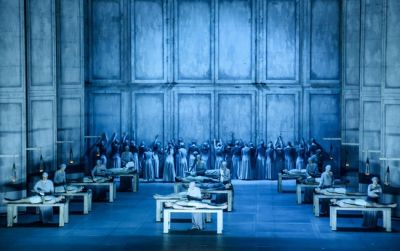 The Plays of Mary, completed by Bohuslav Martinů in 1934, is made out of four different stories drew from folk themes (The Wise and the Foolish Virgins, The Nativity, Mariken of Nimegue and Sister Paskalina). The opera received its world premiere 81 years ago in Brno’s Mahen Theatre with director Rudolf Walter and conductor Antonín Balatka. Bohuslav Martinů was awarded a State Prize for this opera - the most significant distinction won by the 45 year-old composer so far.

Director and artistic director of the Janáček opera Jiří Heřman became first involved with this production in 2009 in Prague together with conductor Jiří Bělohlávek, but it is the young Jakub Klecker who conducts the opera since 2015. “Four different stories that work very well individually, but as a whole they form an extremely rare opera shape. The extensive choir parts are alternated by symphonic passages of the orchestra accompanied by ballet. For me personally, every performance of this opera mystery is rare. I experience something indescribable, spiritual and uplifting on a conductor's podium,” says conductor Jakub Klecker in an interview for KlasikaPlus.cz.

More about the performace here.