2019 sees the 60th anniversary of the death of Bohuslav Martinů, and 2020 the 130th anniversary of his birth. As part of the anniversary celebrations, this site is launching a new series entitled "100 years of Martinů", dedicated to works written or first performed one hundred years ago. These first noteworthy compositions by Martinů will be examined by leading Czech and foreign musicologists.  Michael Crump begins the series with a short overview of the Little Dance Suite, H 123. 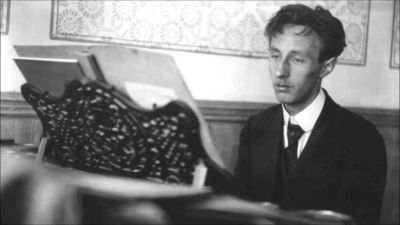 1919 should have been an excellent year for Bohuslav Martinů.  His cantata Czech Rhapsody had recently won widespread acclaim, and he was poised to follow up that success with a major orchestral work for the Czech Philharmonic Orchestra.  Even so, his correspondence with Stanislav Novák (the orchestra leader) shows that, for once, he found composition difficult; he was struggling to become motivated and was unsure if the rather light-hearted work was truly appropriate for the occasion.  Still, he expressed confidence that the work would be a good one and eventually completed it on the 26th October.

Both of his opinions turned out to be valid: the Little Dance Suite is indeed a good work which, one feels, would have enchanted Prague audiences if given the chance.  Václav Talich, however, who was due to conduct the first performance, withdrew the work at the rehearsal stage and it was not heard until a performance on Brno Radio in the 1960s.  Although Talich's precise reasons for the withdrawal are not recorded, it seems likely that the somewhat conservative style of the Suite influenced his decision.  A letter which Martinů wrote to him in 1955 suggests that this may be the case:

You gave me the biggest lesson of my life when one day you stopped the orchestra and said 'Gentlemen, we will not be playing this'  [...] and I have remembered this sad misadventure often, whenever I have been tempted to make a composition lighter..."

Although both artists seem eventually to have regarded the Little Dance Suite as a mis-step, we are not similarly obliged to reject it out of hand.  It represents a fascinating stage in the composer's development, showing little trace of the Impressionism of other works written around the same time (such as Magic Nights or Dream of the Past) and a greater interest in his Czech heritage.

Its infectious rhythms, beguiling harmonic twists and clean, purposeful orchestration point the way ahead, albeit indistinctly, to more characteristic scores of the 1930s, such as Špalíček or Kytice; and its Polka finale rewards the listener with one of the most uplifting melodies of Martinů's entire career. The Little Dance Suite has now been recorded on Toccata Classics and, in celebrating its centenary, let us hope that its merits are appreciated by an ever wider public in the years to come.