The Bohuslav Martinů Revue 2019/2 is out now

In these days, a new issue of the Martinů Revue 2019/2 magazine comes out. What does it offer? First of all, opera Juliette in many forms, as well as obituaries of recently deceased personalities associated with promoting work of Martinů, Graham Melville-Mason and Emil Leichner, or review of the re-edition of the successful album with complete concertant works of Bohuslav Martinů for violin and orchestra recorded by Bohuslav Matoušek. 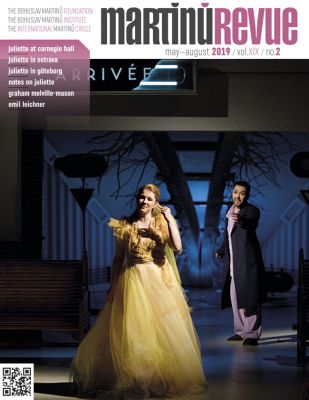 One can say that the main theme of the new Martinů Revue is Juliette. The opera is staged by orchestras and opera houses all over the world - performed by the Amercian Symphony Orchestra, the original Czech version had its American premiere at Carnegie Hall in March. Renáta Spisarová (Harmonie) writes about this important event, she also had the opportunity to interview conductor Leon Botstein. The interview with ASO's Music Director is complemented by positive reviews by the New York Times and Opera Wire.

Reviews of the magazine Harmonie, and websites KlasikaPlus.cz and Ostravan  describe another premiere of Juliette which took place in Ostrava, where it was staged by the National Moravian-Silesian Theater, prepared by the music director of the opera Jakub Klecker and the SKUTR director SKUTR (Martin Kukučka and Lukáš Trpišovský).

On 13 April 2019, Sweden’s Göteborg saw the theatrical premiere of Three fragments from Juliette. The eminent Czech director David Radok rehearsed it together with Poulenc’s one-act La voix humaine (The Human Voice). The production was relocated to Brno on 14 June, giving Czech audiences the chance to see the performance in several repeats at Janáček Theatre. For the first time, Martinů Revue brings excerpts from several reviews of the performance in Göteborg in English translation.

The theme of this surrealist opera is symbolically brought to a conlusion by notes on Juliette by Martinů from 1947 -  ten years after its premiere in Prague - and the memories of the Georges Neveux on the first meeting with the Czech composer.