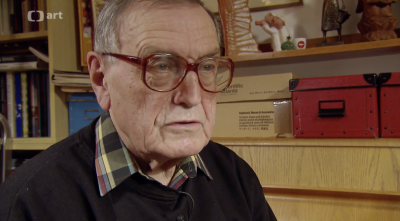 My work as a musician has taken me into the creative worlds of many composers. Among those divinely gifted individuals whose works I performed with pleasure and passion, I rank Karel Husa, Viktor Kalabis, Václav Kučera, Alexej Fried, Pavel Blatný, Jan Klusák, Milan Báchorek, Ivan Kurz, and also Jiří Teml. When I was engaged as a teacher at the Pilsen Conservatoire in 1974–84, we would often meet at the local broadcast station where Jiří functioned as programme director and where he was always welcome as a guest after departing for Prague in 1980. In 1974 I studied and recorded his Five Pieces for Solo Clarinet and discovered how refined his understanding of the instrument was. Three years later he wrote Three Bagatelles for violin, oboe, alternating clarinet and bass clarinet, and piano, which I premiered together with Jitka and Jan Adamus and Eduard Spáčil. The composer had endowed us with some aleatory opportunities, with which he trusted our skills of improvisation and our imagination. The composition intrigued me, and I heartily recommend it to our younger colleagues. An excellent piece.

For the Barock Jazz Quintet, which I established in 1975, Jiří Teml wrote two compositions. His Baroque Suite from 1980 was complemented a decade later by Metamorphoses. Both works testify to their author’s sensitivity towards music of other genres and his extraordinarily complex approach to the sound of individual instruments and the ensemble as a whole. I considered his output to be among the best of what had been dedicated to our quintet – an opinion that was shared by my fellow musicians and by the audience as well.

In 2007 Jiří Teml wrote Double Concerto for Two Clarinets and Orchestra. Although I did not premiere the piece, I have many fond memories of performing it with my colleague Štěpán Koutník and members of the Prague Radio Symphony Orchestra. It was another precious manifestation of the compositional ideas and sentiments of Jiří Teml, and I personally value it as one of the best clarinet works in the whole history of Czech music. In competition with the likes of Kramář, Rejcha, Fried, Páleníček, or Kalabis, that is a veritable feat.

I always enjoyed talking with Jiří Teml, and not just about music. We met each other for years at the Music Faculty of the Academy of Performing Arts in Prague, where he sat on the artistic council, and also at the Bohuslav Martinů Foundation, where he was an active board member for several decades. He contributed greatly, both with his professional erudition and estimates of possible solutions to numerous problems and with his immense propriety and loyalty towards music and its calling. All this is deserving of our sincerest gratitude and – on the occasion of his significant anniversary – our hearty felicitations.

Wishing you good health, peace of mind, the joy of work well accomplished, and respect from all of us who have had the honour of knowing and working with you. It has been a pleasure and an inspiration.

PS: At 85, Casals practised his cello for five hours a day – and you can keep writing.