Another issue of Martinů Revue of the year 2020 was published

A new issue of Martinů Revue is published! It contains mainly studies on the life and work of Bohuslav Martinů. 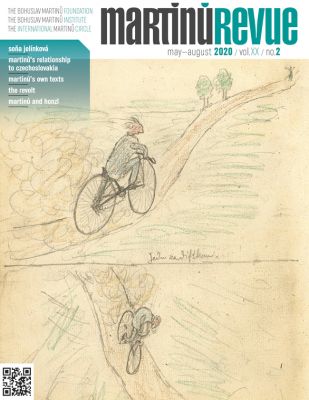 In the new issue, Soňa Jelínková, probably the oldest member of the International Martinů Circle, will share her memories of Bohuslav Martinů. He provided her with the necessary support when she was the only student from Czechoslovakia to study at the Curtis Institute of Music in Philadelphia in the 1950s.

In the next article, Lucie Berná reflects on the value of the ballet Vzpoura, H 151. In the form of an interview, she argues amicably with musicologist Nicolas Derny about whether the work is musically and in terms of quality and "does this ballet deserve to be forgotten?"

The second part of Aleš Březina's study "Bohuslav Martinů and his ambivalent relationship to Czechoslovakia" follows the first part, which ended in 1941, when Bohuslav Martinů managed to escape with his wife on the ship Exeter from Europe to the USA. Martinů wanted, fully aware of his talent, to devote himself fully to composing, so he asked the Czechoslovak government in exile for regular financial help. His request was obviously heard, because in 1944 he asked Jan Masaryk to increase the regular amount - "Dear Minister, I could find a job here, so I would not have to ask for support, but it would mean all the waste of time for my composition." The study also describes the vicissitudes of Martinů's life and work after the communist coup in 1948, the several-year removal of his works from concert repertoires, or the collaboration of his friend Miloš Šafránek with the StB. Thanks to another friend of Bohuslav Martinů, Karel Šebánek, the copyright of the manuscripts located in Czechoslovakia at that time was changed just before the composer's death, as the composer released that the publication rights would be transferred to the Czechoslovak state. Part of the important cultural heritage of the composer thus returned to Czechoslovakia.

In this issue of Revue we print another text by Bohuslav Martinů entitled "Did Opera Operate?", Which was published in the magazine Přítomnost in 1935. The article is divided into four parts - texts, singing, leitmotif and "feeling". Through these four categories, Martinů reflects on the problems facing opera and the main differences between romantic and modern style. 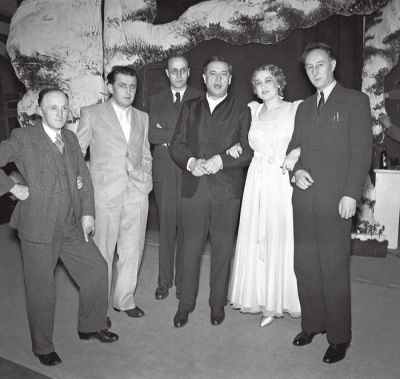 Last year, the Bohuslav Martinů Institute managed to study the estate of Jindřich Honzl, an important figure in the interwar avant-garde theater and also a friend of Bohuslav Martinů, and thus obtain new important sources. In the last article of the magazine, Marek Pechač deals with new findings, which bring more than 40 unknown letters and postcards, which were exchanged by both artists. Bohuslav Martinů seldom archived incoming correspondence, so Honzl's copies of his own correspondence are very valuable.

Become a member of the International Martinů Circle and read your Martinů Revue!