Conductor and dramaturge Václav Nosek would celebrate his 100th birthday

On 5th April, the conductor and dramaturge Václav Nosek would celebrate his 100th birthday. He was strongly connected with the theatre in Brno, where he worked for three decades. Between 1960s and 1980s, he created the theatre in Brno a very progressive one with very interesting and diverse dramaturg. He regularly introduced different works of his three favourite composers – Bohuslav Martinů, Leoš Janáček and Sergei Prokofieff. 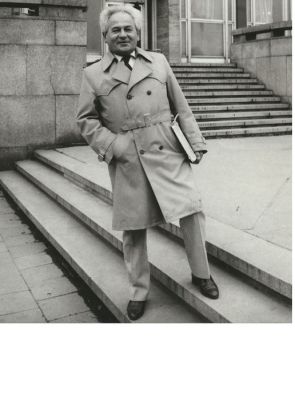 Nosek made a big contribution in the task of promoting Martinů's works. He was doing a wide research, went through many archives and discovered works which had never been performed before. Then he carefully prepared them – made needed revisions and usually also conducted them. Thanks to Nosek, many forgotten works were performed as a world-premiere or Czechoslovak premiere.

This is the case of the operas The Marriage (1960), Ariadna (1962), The Voice of the Forest (first stage performance) and Alexander Bis (both these operas performed on one evening in 1964). One of the most remarkable things was definitely the first Czechoslovak performance of The Greek Passion in 1962 – just 6 months after the world premiere in Zürich – as it is a work with strong religious message which was something unacceptable for the regime.

Nosek initiated the world premieres of operas influenced by the "Dada" movement, found in the archive in Polička – Tears of the Knife and Three Wishes or Inconstancy of the Life.

Václav Nosek also worked intensively on reviding and editing another opera named The Day of Good Deeds found in Zürich. Unfortunately the whole third act of the opera was missing and Nosek did not manage to complete ther revision during his life. He died on 22st January 2000.

Towards the end of his career, Nosek worked shortly in the National Theatre in Prague where he initiated "The first complete performance of operas by Martinů" which was realised between May and June 1990.