Opera performance students of Janáček Academy of Music and Performing Arts (JAMU) in Brno performed two one-act operas by Bohuslav Martinů. Premieres were given to empty halls due to the pandemic restrictions. Videorecording is available on YouTube channel of the Academy until the end of June.

Graduation performance of the singers was planned already in March, but the situation allowed the rehearsals only in May. The orchestra was replaced by piano accompaniment performed by Helena Fialová, Filip Urban is conducting. The director for The Voice of the Forest was Jana Tajovská Krajčovičová, for Comedy of the Bridge Kateřina Křivánková. Both short operas are originally written for the radio, the Brno performances were however staged, with the scenography by Tereza Jančová and costumes by Adéla Beranová. The main roles were played by the graduating singers Ondřej Líňa, Tomáš Jeřábek, Hana Boháčková, Zuzana Čurmová and many others.

First of the three recorded performances is available here

Bohuslav Martinů wrote both one-act operas in 1935 for the Czechoslovak Radio. The Voice of the Forest is based on libretto by poet Vítězslav Nezval, the Comedy on the Bridge was written by the composer himself on the theme by Czech 19th century playwright Václav Kliment Klicpera.

Cast of Comedy on the Bridge, photo Marek Olbrzymek 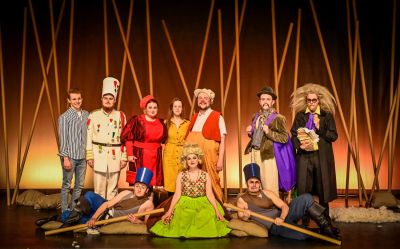