The Bohuslav Martinů Foundation Medal was awarded to the musicologist, publicist, and dramaturge PhDr. Ludvík Kašpárek at the occasion of his jubilee. The Board of Directors has given the award and diploma on 14th June 2022. 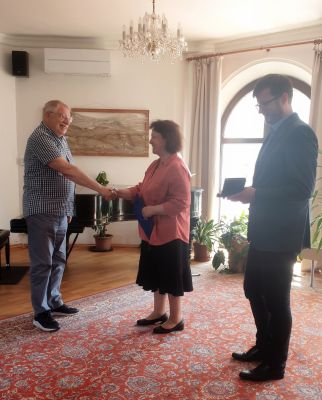 Dr. Ludvík Kašpárek (*1942) has many years of experience in Czech music life. He works as a music critic and writer in daily and expert press, he is also the author of expert texts in the concert programs of the Czech Philharmonic Orchestra and Prague Symphony Orchestra (FOK). For many years he worked as a writer at Czech Radio.

During the years 1992-1999 he was a spokesman of the Czech Philharmonic Orchestra and he presented public general rehearsals and a series of concerts for young listeners. In 1999-2007, he was the Director of Chamber Philharmonic Orchestra Pardubice. Since 1999, he is active as a dramaturge of Czech Chamber Music Society. With all his activities, he contributed to promotion and performances of the Bohuslav Martinů oeuvre. He is a member of the Supervisory board of Bohuslav Martinů Foundation. 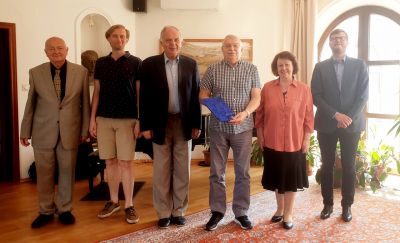 The Bohuslav Martinů Foundation awards its medal to prominent personalities who have promoted the works and legacy of the Polička-born composer. Previous award-winners include Rudolf Firkušný, Zuzana Růžičková, and Jaroslav Mihule. Last year, the medal was presented the sculptor Milan Knobloch.