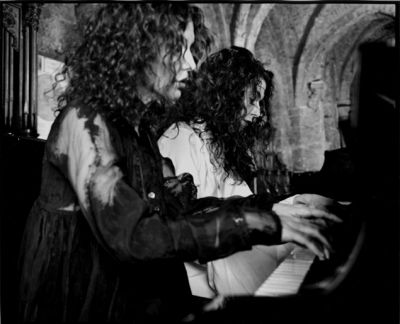 The end of September in Paris will definitely belong to Bohuslav Martinů whose 125th birth anniversary we will celebrate next year. On Tuesday 23rd September, his “Kitchen Revue” will be performed at the Czech Centre in Paris, starting at 8.30 PM. The organizers have focused on the original 1927 version, and the entire event is held to celebrate the new CD “Martinů - Praha-Paříž-New York”, released on Salamandre label and featuring the likes of Soňa Červená. The concert is organized under the auspices of the Bohuslav Martinů Foundation and the Czech Centre in Paris.

This is, however, not the end of Martinů days in Paris! 24th and 25th September, the sister pianist duo Katia and Marielle Labèque will perform “Concerto for two pianos, H 292”, accompanied by Orchestre de Paris and the conductor Tomáš Netopil. Head to Salle Pleyel for 8 PM both days.

Read the organizers’ official synopsis: "The programme of this concert ties together these two grand Slavonic composers, capables of passing over the melancholy of the Vltava riverside, carried by the Bohemian breeze, haunted by popular, folk melodies: Dvořák and Martinů love Prague, despite the former leaving his country in order to teach in New York, and the latter having to flee his hometown to escape the Second World War and end up in USA after a long stay in Paris. Apart from being attached to their home country, the two composers also share the same passion for poetics: Dvořák the romantic and Martinů the rhytm genius whom Katia and Marielle Labèque have been joyfully playing for ages now.

For friends of the Czech centre in Paris, the Orchestre de Paris has prepared a special offer : buy one ticket and get one free. More information here: http://paris.czechcentres.cz/cs/program/detail-akce/deux-soirees-tchques-avec-lorchestre-symphonique01/