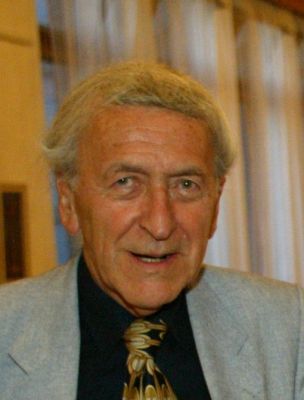 On September 10, 2014, the composer, pianist and essayist Oldřich F. Korte passed away in Prague. One of the founders and long-serving member of the Board of Directors of Bohuslav Martinů Foundation in Prague was 88 years old.

Infinitely kind-hearted and at the same time uncompromisingly critical, Oldřich František Korte was a man of immense paradoxes. He was jailed by the Nazis and, twice, by the Communists (the first time for attempting to leave the republic to go to study composition with Bohuslav Martinů), yet he never grew embittered.

Korte's love of Martinů's music was absolute and anchored in a perfect balance between an analytical mind and widely open feeling. His spirited analytical texts on Martinů's works were a pleasure for all perceptive readers (and a translator's nightmare), such as the analysis of the first movement of the Concerto for Oboe and Small Orchestra, H 353.

Oldřich František Korte's works are being performed by leading Czech orchestras. The world-famous pianist Garrick Ohlsson added the Sonata for Piano (1951 - 1953) to his repertoire in 2009 and has performed it at dozens of concerts all over the world since then. The music world has started repaying Oldřich F. Korte for that whcih he has given to other, Bohuslav Martinů in particular.