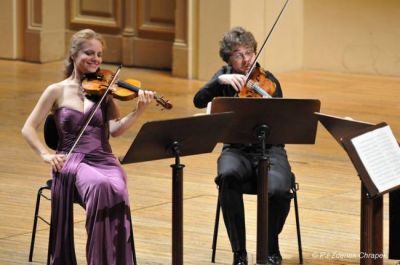 Ten years ago Julia Fischer was in a CD shop in Vienna when she came across a recording by Russian violinist David Oistrakh of Bohuslav Martinů’s Sonata for Violin and Piano No. 3. She had never heard the piece before. When she played the disc, it was like a religious experience.

“I was immediately taken 100 percent by the piece,” she said at a Prague Spring press conference on Tuesday morning. It launched her into an exploration of Martinů’s music, which turned out to be a perfect fit with her style and tastes.

“From the first second I heard this music, it seemed so natural,” she said. “Shostakovich I had to find out how to play. Martinů feels like the most natural thing in the world.”

Fischer’s position as artist-in-residence at this year’s festival gave her a chance to play two  Martinů works – the sonata with piano accompanist Milana Černjavska on Monday night, and the composer’s String Quartet No. 5 with her string quartet on Tuesday night. For the audiences, it was a rare opportunity to hear the Czech composer played by a world-class artist who understands and cares about his work.

For the performer, it was an opportunity she seldom gets. As an example of how difficult it can be to program Martinů, Fischer offered a story about a concert earlier this year at the Théâtre des Champs Elysées in Paris, where she informed the promoter that she wanted to play Martinů. “Go ahead,” he told her. “But I’m not going to put his name on the program. If I do, nobody will come.”

At her recital on Monday night in Prague, Fischer went so far as to rearrange the order of the pieces – a last-minute change announced in an insert in the program book – so that she and Černjavska could play the Martinů sonata not second but last. “I wanted the audience to leave the hall with the sound of Martinů in their ears,” she said.

Which was not exactly how things worked out. The audience was so taken with the women’s playing that it called them back for three encores, and left the hall with the sounds of Ysaÿe, Kreisler and Sarasate in their ears. But their rendition of the Martinů sonata was riveting, a virtuoso performance that was by turns dramatic, impressionistic, humorous and vividly colorful in the work’s final, jazzy movement.

The Tuesday concert offered an impressive display of versatility, with Fischer playing first violin in string quartets by Beethoven and Martinů, and piano in Dvořák’s Piano Quintet in A major. Her keyboard work was lyrical and graceful, and her ensemble’s light, brisk treatment of Beethoven’s String Quartet No. 4 was elegant and finely detailed. Martinů, however, was once again the centerpiece of the concert, with the quartet playing a fierce, driving version of his String Quartet No. 5, skillfully accentuating its dissonances and percussive effects.

There was another reason Fischer programmed so much Martinů this week: She is making a film about the composer, and needs to start taping performances of his work. She is planning to shoot part of the film in Polička, his birthplace, and will return to Prague in March next year to perform his Violin Concerto No. 2 with the Czech Philharmonic.

If Fischer had an epiphany when she discovered Martinů’s music, then apparently her conversion was total. In discussing her reasons for making the film, she was quite clear about her goal: “I want to show people that he was one of the greatest composers of the 20th century.”