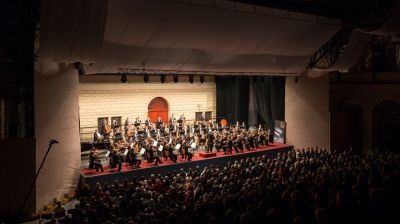 The 57th edition of the Smetana Litomyšl festival was launched by the Czech Philharmonic Orchestra, conducted by Jiří Bělohlávek. On a pleasant evening of June 11th, they played in front of more than a thousand visitors at the auditorium in the chateau courtyard, performing Czech music in a perfectly unpretentious manner. During the first half of the concert, young pianist Jan Bartoš dazzled in the seldom heard Smetana sketch Macbeth and the Withes for piano and orchestra, after that he admirably performed Dvořák´s notoriously difficult Piano Concerto in G minor.

The highpoint of the concert, though, was Bohuslav Matinů´s Symphony No. 4, composed in the USA in 1945. In second movement of this symphony you can hear the famous motive which Martinů himself was proud of and to his friend Miloš Šafránek decribed it as the most beautiful motive he had ever written. He even claimed that in that theme was pure creativity as in the nature itself. The work was included in the programme in connection with the anniversary of the end of World War II. A certain role was also played by the fact that just before the start of the festival the Bohuslav Martinů Institute had presented to the public the first two volumes of the Complete Edition of the composer´s work, The Epic of Gilgamesh, H 351 and Symphony No. 4, H 305. This project is scheduled to be rolled out over the next half century and is realized with cooperation of publishing house Bärenreiter, Bohuslav Martinů Institute and with the support of Bohuslav Martinů Foundaton.

Harmonie‘s Petr Veber praises the genius setting, the atmosphere of the evening or the acoustic enhancing the impression and because of which a number of traits and details that make Martinů´s music so attractive could come out to the full. According to him the concert audience „witnessed extraordinarily inspired moments, giving rise to the ideal account of the symphony, which serves to confirm its place among the classics.“

The whole article about the opening concert of the Smetana Litomyšl Festival and Martinů´s Symphony No. 4 is to be found in new Martinů Revue 2/2015.

Find out how to get it here.