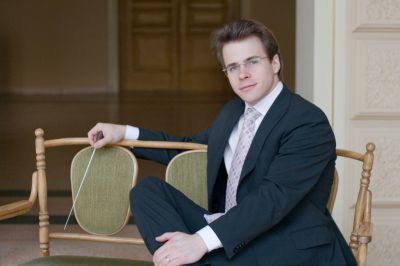 In the new issue of Martinů Revue you can find this interview with famous Czech conductor, who was listed by Gramophone magazine as one of ten young conductors ‘on the verge of greatness’ and who recently became the first recipient of the Sir Charles Mackerras Award. Of course it is Jakub Hrůša, president of International Martinů Circle, who will become in season 2016/2017 chief conductor and music director of the Bamberger Symphoniker – Bayerische Staatsphilharmonie.

Jakub Hrůša was interviewed by Jana Vašatová on the programme Telefonotéka, broadcast on 15 September 2015 on the Czech Radio Vltava station.

The Bamberger Symphoniker are a splendid and globally acclaimed orchestra with a great tradition. You must be delighted!

Yes, I am delighted indeed.

When did you first appear in Bamberg with the local orchestra? For how long have you known each other?

I first conducted them about a year ago – last November or December, we performed Smetana’s My Country together. So we jumped headlong into the most turbulent current of Czech music. And I think that we demonstrated that we understand each other very well even in the most Czech of music. Later on, when we saw that we also understand each other in non-Czech music, it was just a matter of time before both parties arrived at the opinion that we would form a wonderful team.

And did you guess that such a situation could occur?

To tell the truth, I did sense that I could end up working in Bamberg. But I was not sure about it, as the negotiations only took place during the summer, and it was still rather in the sphere of wishful thinking. Over the past few years, there have been quite a lot of orchestras discussed as potential places for me to be based. Yet now, in hindsight, I can say that none of them resonated with me as much as Bamberg did. I actually thought of the Bamberger Symphoniker as the post of my dreams.

Will you miss the Prague Philharmonia? You have spent many years with them.

Yes, I certainly will miss them.

Will you be coming back? Will you have time to do so?

I will be busy, but I will try to come back regularly. I know that you have not avoided opera, that you have divided your activity equally between the symphonic repertoire and opera, but opera productions require far more time for preparation. For the time being, Bamberg only performs operas in concert versions. That is, in my opinion, one of the great strengths of the Bamberger Symphoniker. In this respect, my predecessor, Jonathan Nott, established the tradition of concert performances of operas as being an integral part of the seasons. They even make tours with the concert performances of operas, so I would be a fool not to pursue and not to develop this tradition.

What are the Bamberger Symphoniker like when it comes to the colour of their sound?

It is difficult to describe in words. What is certain, though, is that the orchestra have their specific, recognisable, culture of sound, which, either owing to its originally springing from Prague or their retaining in some way this special type of creation of the tone and orchestral culture, is the reason why the Bamberger Symphoniker are branded in Germany as an orchestra possessing a Czech sound. So they are referred to as the best Czech orchestra in Germany. And in this regard, when we performed My Country together, as well as some of Dvořák’s music, I really felt that they had a close affinity to it, that they were at home in Czech music. Even though they, naturally, do not sound like, let us say, the Czech Philharmonic. But I wouldn’t say that the sound is alien to the music.

The Bayerische Staatsphilharmonie were formed about 70 years ago from members of the German Philharmonic Orchestra of Prague, who were expelled from Czechoslovakia in the wake of World War II. None of those musicians are now in the orchestra, yet the manner of playing and the sonic and timbre imagination has evidently been handed down.

Yes, absolutely, it definitely has been handed down. Just as it has in the Czech Republic. Of course, none of those who experienced the era of Václav Talich are alive today, and those who worked intensively under Václav Neumann are now in a minority in the Czech Philharmonic. Nevertheless, we do speak of a certain continuity and a tradition of handing down the manner of playing. I have always tended to be somewhat restrained in assessing such matters, as it can very easily serve as an excuse for generalisation, leading to insufficient current care of this or that orchestra. Yet when you travel across Germany and listen to the individual orchestras, listen to the sound of the Berliner Philharmoniker, the Gewandhaus in Leipzig, the Staatskapelle Dresden or the Bamberger Symphoniker – and I am deliberately naming orchestras with a very bold tradition, considered exemplary in a way – you can hear that each of them has a different sound, immediately recognisable by connoisseurs.

What, then, is the role of the chief conductor today in supporting this tradition?
Jonathan Nott was in Bamberg for some 16 years.

You will be only the fifth…

And it is splendid, as it bears witness to the institution’s stability. You can believe me when I say that after some time of permanent contact between the orchestra and the conductor there appears the imprint of a certain aesthetic approach to the sound, while the conductor, naturally, embraces at least all the positives of the orchestra he has continued to work with. In a way, though, this can also turn into a trap, with the result that the conductor expects identical qualities from other orchestras he happens to perform with. I have experienced it myself many a time during my trips around the world, expecting a culture of regard for detail, interplay and exquisite treatment of phrases, similar to that of the Prague Philharmonia, and many a time I haven’t found such qualities. Then it is somewhat traumatic – although you don’t want every orchestra to play the way your own orchestra does, and you are, on the contrary, curious about the novelties these orchestras will bring you, you are extremely accustomed to the qualities you know from home. That is why I very much hoped, for my own sake, to have the good fortune to work with an orchestra different, yet not inferior, to the Prague Philharmonia. I would deem it psychologically difficult to suddenly find myself with an orchestra that would compel me to recall again and again the past and not be able to savour the present. And the Bamberger Symphoniker are precisely what I had hoped for, as the orchestra is brilliant, capable of virtuosity, possessing an amazing culture of sound, while being totally different to the Prague Philharmonia. But even so, they do have similar roots – I am really excited about it.

Is it possible to learn how to conduct?

Yes, it is. There are certain rudiments or aspects of the profession that not only can be learned but, in my opinion, simply have to be learned. You know, all of us have to learn our mother tongue or the language in which we express ourselves, but no one can teach us how to enchant by speaking the language, it is up to ourselves to try.

Which do you deem to be of greater significance – superlative individuals in an orchestra or less superlative members but a superb orchestra as a whole?

They’re not mutually exclusive; no orchestra stands or falls merely on superlative players. If you have a few brilliant musicians and the rest are run-of-the-mill, the result is not good. Unfortunately (or fortunately), this also holds true the other way around. You can have a disciplined orchestra, with each member being an immensely efficient part of the collective, but if it doesn’t include at least a few dazzling individuals, who give you goose bumps when they undertake the solos, the orchestra will never be truly topnotch. In the final analysis, the distinctiveness of individual persons counts as much as the collective force does. Accordingly, the world’s best orchestras have both. I think that the Bamberger Symphoniker has plenty of musicians really capable of enthralling the audience, a few top-class instrumentalists, laureates and winners of international competitions, with the majority of them not considering the orchestra a sort of stepping stone but really being at home there, feeling good among the collective. And this bears witness to the institution’s health.

What is it like to perform at the Joseph-Keilberth-Saal in Bamberg?

The hall is amazing, even though not ranking among the very finest in the world, such as the Suntory Hall or the Berliner Philharmonie. It has some minor deficiencies, but overall it is excellent. The Bamberger Symphoniker are resident there, rehearse in the hall, similar to the Czech Philharmonic in the Rudolfinum, so it is an integral part of the orchestra’s identity.

You have recorded Josef Suk’s Asrael with the Tokyo Metropolitan Symphony Orchestra. Have you made a recording with the Bamberger Symphoniker?

No, but we have already been working on it. Look out! (laughs) I wanted to bring the disc with Suk’s Asrael as proof of my missionary activity in Tokyo, where, to my great satisfaction and to the joy of the Japanese audiences, I have succeeded in intensively presenting the music of two composers that have yet to assume a firm position there. At the end of my guest tenure, we will perform the complete set of Bohuslav Martinů’s symphonies, and almost all the major works of Josef Suk. I am very happy to be able to present works in Japan that have not yet become part of the general consciousness.

And what are your plans when it comes to the repertoire in Bamberg?

It has yet to be crystallised, but I can say at this juncture that I will pursue the line of the traditional Central European repertoire in the manner they represent it. It will definitely encompass Mahler’s music, which in a way is their hallmark. Furthermore, the repertoire should include Czech music, with the emphasis being placed on Martinů, Janáček and Suk. Then, contemporary music and a few operas in concert versions. It will be a varied mix, which I have always considered alluring, as I have never liked the repertoire to be limited to a single line. That would actually be depriving the audience.

You will have first opportunity to see Jakub Hrůša on 15 January with Orchestre Philharmonique de Radio France in Paris. He will perform Martinů´s Symphony No. 6 (Fantaisies Symphoniques) and Concerto for Violoncello and Orchestra No. 1 with Johannes Moser. More information here.