MusikWerk in Lucerne is trying to reanimate works of great composers that are not performed as frequently as they would deserve. Last year, Arnold Schoenberg was in the spotlight, now it´s time for Bohuslav Martinů!

Swiss project MusikWerk is introducing a festival called "Bohuslav Martinů Journeys" which offers concerts throughout 2016 played exclusively by Ensemble Metropolis. Initiated and curated by artistic directors Beni Santora and Adrian Meyer. Programme features mainly Martinů´s compositions such as Tears of the Knife, String Quartet No. 5, Les Rondes or suite from The Kitchen Revue. Martinů will be accompanied by Arthur Honegger, Albert Roussel, Igor Stravinsky or Béla Bartók during five concerts, which will take place in MaiHof, modern hall in Lucerne. 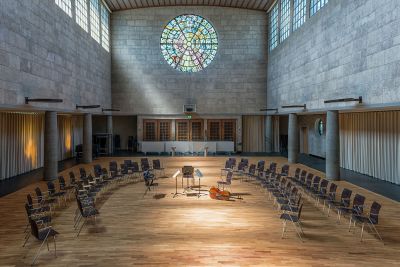 Festival´s title Bohuslav Martinů Journeys refers to a life path of Martinů, who was forced either by his desire or external circumstances, to travel and work around Europe and USA. As of 1930´s the Czech composer was supported by conductor, patron and friend Paul Sacher, so it is no wonder that he eventually ended his journey in Sacher´s Schönenberg in Pratteln, Switzerland. It is also where he composed some of his best pieces such as the lyric opera in 1 act Ariadne, The Greek Passion, Mikesh from the Mountains, Concerto for Piano and Orchestra No. 5 (Fantasia concertante) or few movements from Double Concerto for Two String Orchestras, Piano and Timpani, which was finished in somewhat emotional circumstances a few days before Munich Agreement in September 1938.

‘I have never met a man more simple, sincere and affecting in my life.’ Paul Sacher about Bohuslav Martinů.