The Greek Passion premieres in Graz!

This is an extraordinary moment for The Greek Passion, H 372: the Martinů masterpiece currently appears in both its versions on two European stages at the same time. While the 2nd version from 1959 has been in production at Aalto-Musiktheater Essen since September 2015, the Graz Opera will see the premiere of the original 1957 version, reconstructed by the Institute's director, Aleš Březina, this Saturday 5th March 2016. It is the first time both versions are being shown simultaneously around European opera houses. 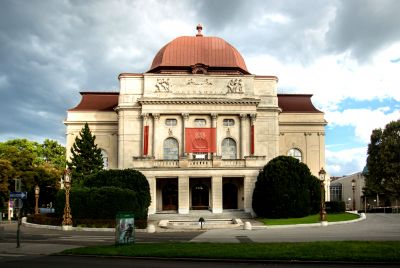 Bohuslav Martinů wrote the libretto himself, based on Nikos Kazantzakis' 1951 novel Christ Recrucified. Many similarities can indeed be found between the story - where refugees from a plundered village seek for a sanctuary - and Martinů's involuntary exile as well as the current situation around refugee crisis in Europe. Neither of the authors lived to see its premiere.

The opera exists and runs in two different versions. Martinů firstly offered the piece to the Royal Opera House in London with Rafael Kubelík as its conductor. After initially positive reactions, the opera was dismissed, and Martinů decided to rework the piece dramatically. Eventually, the opera premiered at the Zurich Opera under the direction of Paul Sacher on June 9, 1961. Almost forty years later Aleš Březina restored the first version of The Greek Passion from shattered parts that the composer gave to his friends and resurrected the opera in all its dramatic unity. Though rather late, the original version of the opera was finally performed at the Festival in Bregenz in 1999 and one year later finally coming back to where Martinů initially wished to see it – at the Royal Opera House in London.

Have a look at the 1999 Bregenz premiere of the 1st version as directed by David Pountney: