On March 18, Stanislavsky and Nemirovich-Danchenko Moscow Academic Music Theatre will give the Russian premiere of two operas of 20th century. The first one is La Favola d'Orfeo by Italian composer Alferdo Casella, the second one is Bohuslav Martinů´s lyric opera Ariadne. 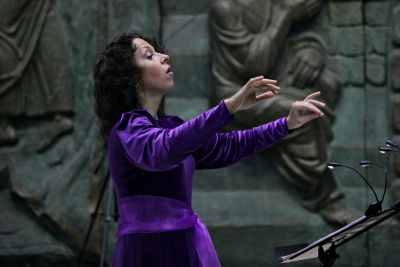 2016 sees Martinů’s name being particularly associated with his major operas The Greek Passion (1st version in Graz | 2nd version in Essen) and Juliette (Prague | Berlin). Among his operas we can find fatal, tragic, grotesque or even dreamy ones, and Martinů had obviously his reasons to be inspired by another drama of his friend Georges Neveux (Le Voyage de Thésée) for the new opera, for which he wrote the libretto all by himself.

Martinů himself classifies the genre of his latest creation, Ariadne, as neo-baroque. Yet his musical quests dig deep into much more ancient styles and forms. In the music of Ariadne we hear quotations from early Christian Byzantine chants and Greek folklore.  The archaic sounding of the high flutes and harp in the symphonic interludes cleverly conveys the flavor of the ancient Hellas.
Maria Maksimchuk, Music Director and Conductor

This one-act opera was composed in the final year of Martinů´s life and it took him just one month to finish it. He started to compose it just because he got tired from work on The Greek Passion which cost him a lot of effort. Unfortunately, Martinů didn´t live to see Ariadne´s world premiere in 1961.

Martinů is a veritable master of orchestration. He also possesses a precise feeling of form and a laconism. To my mind, Martinů‘s Ariadne, as judged by its artistic value, may rightly be called the Dido of the 20th century, for since the genius of Purcell no one has ever managed to recreate the musical pattern of a myth in so sublime and so clear a manner.
Maria Maksimchuk, Music Director and Conductor

The following performances are to be given in Moscow: