This year’s first issue of Martinů Revue contains first review of the first volume of Bohuslav Martinů Complete Edition The Epic of Gilgamesh, which was recently awarded the German Music Edition Prize for "Best Edition" of 2015.

Alongside this review by Ulrich Barthel, originally printed in the German magazine Chorzeit, we publish a thrilling interview with Bärenreiter Prague’s editor-in-chief Eva Velická who talks about the Bohuslav Martinů Complete Edition, her favourite Martinů pieces or publishing of Czech music in a wider context. 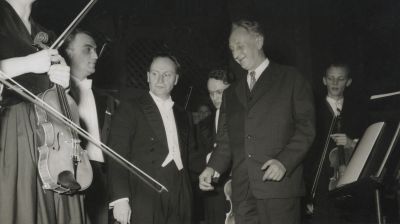 The 125th anniversary of the birth of the Czech composer Bohuslav Martinů (1890–1959) was marked by the publication of his work The Epic of Gilgamesh, H 351. It is the first volume of the historically informed complete edition of the artist’s oeuvre, planned by Bärenreiter Verlag as a grand-scale project that will comprise a total of 100 volumes. The superbly elaborate publication, based on extensive research, is the fruit of 20 years of meticulous work on the part of the Bohuslav Martinů Institute in Prague and its founder, Aleš Březina. The Epic of Gilgamesh is a challenging masterpiece lasting approximately 60 minutes and formally lying somewhere between a secular cantata and an oratorio. Owing to Martinů’s turbulent life, exploration of the sources for the work was an extremely complex task.

Martinů occupied himself with the text of the epic poem from ancient Babylonia, recorded on clay tablets, for more than 15 years, during which time he lived and worked as a refugee in a number of countries. Consequently, so as to be able to provide a detailed description of the circumstances under which the work came to life and was performed, it was necessary to read through countless letters and music sources housed in various places. The Foreword contains quotations of significant passages from the voluminous correspondence between Martinů and his Swiss patron Paul Sacher, who commissioned a number of works from the composer. The carefully selected facsimiles concisely complete the precise and comprehensive account of the process of the piece’s creation, from the initial idea in 1940 right up to the premiere in January 1958.

Martinů was truly fascinated by the epic about the heroes Gilgamesh and Enkidu, one of the earliest surviving great works of literature. He was particularly enthralled by the sheer timelessness of the subjects it deals with, including power, friendship and the question of what ensues after death. The critical edition draws upon the Epic’s original English translation, yet its supplement also contains the text’s German version, in which the piece was first performed. All the other accompanying texts are in English and Czech. Some of the changes pertaining to the distribution of the roles during the premiere – for instance, the division of the part of the Speaker between two soloists – have been restored to the form corresponding to Martinů’s original conception. The multilayered work requires a large orchestra, five soloists and the permanent engagement of a mixed choir, which here and there is even divided into eight parts, with all kinds of roles being assigned to the choir during the course of the piece.

The musical material of the three-part composition is developed exclusively from short motifs. It ranges from orchestral writing with great independence of the parts, to hymn-like, even ecstatic choral sequences and solo recitatives, which are references to early Renaissance music. The score is brilliantly complex, and performance of the work requires the utmost determination in dealing with the mythical subject matter. Penetrating Martinů’s musical thinking is only possible following thorough and patient preparation.