The Bohuslav Martinů Days 2015, which took place from 22 November to 20 December, featured 18 concerts. Many of the festival’s events were reviewed on the Harmonie magazine website www.casopisharmonie.cz. We have selected a few of these reviews for a new Martinů Revue. They are published in full in the first issue of 2016.

(…) on the programme was Bohuslav Martinů’s Fantasia for Themerin, Oboe, String Quartet and Piano, H 301. The work, which is immensely engrossing — both sonically and conceptually — was transformed in the hands of the artists into a magical gemstone, abounding in rich, fantastic colours. The piece came across as magical, owing largely to the sound of the themerin, which in the higher registers resembles the female voice and in the lower register the cello, but also due to its appearance. 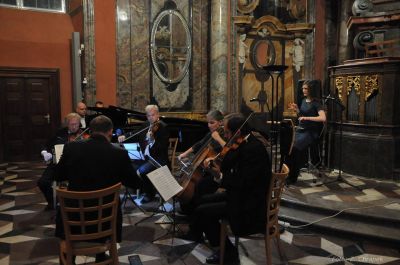 Those who wanted to spice up the second Advent Sunday (6 December 2015) with a non-traditional artistic experience were right to opt for a musical event whose performers, programme and venue were anything but traditional. The evening brought together two distin guished conductors: Jan Talich and Vladimír Valovič, who headed their respektive orchestras, the South Bohemia Philharmonic and the Gustav Brom Czech Radio Big Band. The evening’s soloist was the pianist Jan Simon. With regard to the fact that the concert was part of the Bohu slav Martinů Days festival, its first half was dedi cated to works by Martinů, the 125th anniversary of whose birth was celebrated in 2015. (...)

Bohuslav Martinů Days 2015 on 8 December  | A Spectacle of Voices. Martinů and Prague Philharmonic Choir on the Same Wavelength
by Michaela Vostřelová

A celebration of the 125th anniversary of Bohuslav Martinů’s birth took place at the Rudolfinum in Prague under the direction of Lukáš Vasilek with his Prague Philharmonic Choir. On 8 December, they performed four cantatas based on love and spiritual folk poetry. The program, however, did not include the quartet of well-established cantatas from Vysočina: The Opening of the Springs, H 354, The Legendof the Smoke from Potato Fires, H 360, Romance of the Dandelions, H 364, and Mikeš of the Mountains, H 375 (…) I assume that the concert’s programme was the fruit of Lukáš Vasilek’s generally infallible sensibility, so I also attribute to him the excellent idea of simplifying the instrumental accompaniment of the Legend of Saint Dorothea. (...) 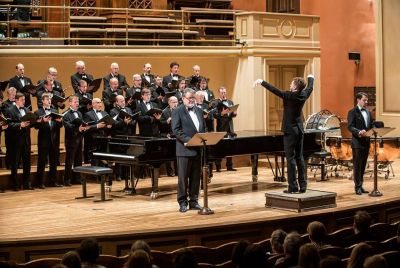 Fabulous, immaculate. Such was the concert given by Martinů Voices on 19 December at the Martinů Hall in Prague, on the penultimate evening of the 21st edition of the Bohuslav Martinů Days. No one had any doubt as to the calibre of the Prague Philharmonic Choir under Lukáš Vasilek, along with his own chamber choir, but their performance surpassed even the high expectations. (...)

The first piece, Martinů’s Serenade, H 199, made clear that the relatively young ensemble was capable of performing without any trace of tiredness or jetlag, just a day after returning from Oman. Virtually everything at the concert, dedicated to the French esprit, came across as breezy, extremely virtuoso and unbelievably colourful. Martinů’s four-movement Serenade is not a work that has been frequently played at concerts, perhaps in part because it makes extraordinary rhythmical demands on the orchestra. The third movement whizzed by at such a tempo that there was no time for any inaccuracy. The Prague Philharmonia, a chamber orchestra, felt the rhythmic pulse as if the ensemble were an indivisible unit. (...)