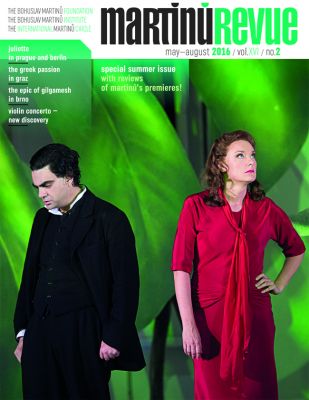 This year’s second issue and special summer edition of the Martinů Revue is finally out. So what's in it?

Besides of news like thrilled review from Nigel Simeone in prestigious magazine NOTES on first two volumes of the Bohuslav Martinů Critical Edition (The Epic of Gilgamesh and Symphony No. 4) it brings detailed story from the president of the International Martinů Circle Jakub Hrůša where he describes his relationship with his mentor and friend conductor Jiří Bělohlávek.

You can read reviews from Petr Veber and Lenka Šaldová on a new productions of an opera Juliette which had its premiere in spring in Prague and Berlin where stars Magdalena Kožená and Rolando Villazón appeared. Rienhard Kriechbaum from Wiener Zeitung and Martin Gasser from Kronen Zeitung write about first version of The Greek Passion in Graz, premiered on 5 March.

In a interview with violoncellist and winner of the Prague Spring Competition Tomáš Jamník you can read about The Bohuslav Martinu Foundation Competition which he won with Dvořák Trio (Jan Fišer, Tomáš Jamník, Ivo Kahánek) back in 2004.