The Smetana Trio received the BBC Music Magazine Award in the category of chamber music for its complete recording of Bohuslav Martinů's piano trios. It is not the first appreciation of last year’s recording released by Supraphon, Jitka Čechová (piano), Jiří Vodička (violin) and Jan Páleníček (violoncello) received also Diapason d´Or, BBC Music Magazine Disc of the Month or Sunday Times Album of the Week.

The Smetana trio was nominated by a professional jury together with the Escher String Quartet (Mendelssohn‘s String Quartets Nos 5 & 6) and the Danish String Quartet (Adès‘s Arcadiana, Nørgård‘s Quartetto Breve and Abrahamsen‘s 10 Preludes) and the winner were chosen by the magazine's readers.

"We are doubly happy. Above all, because many more doors to world scenes are being opened to Martinu's specific music. His trio chamber work certainly deserves the attention of musicians from across the globe. Thanks to BBC, too, it may become an integral part of the repertory in the foreseeable future," Jitka Čechová said. „From our point of view there is obviously a joy which stems from our effort to make Martinů’s music more accessible. All of the trios are very different - there is diverse atmosphere in these works  - so it is possible for musician to show Martinů‘s various range of compositional techniques. It was very interesting for us to expose an emotional deepness of these works which was often wrapped in complicated rythmic and polyphonic  structures and yet still keeping its Czech-Moravian soul.“ 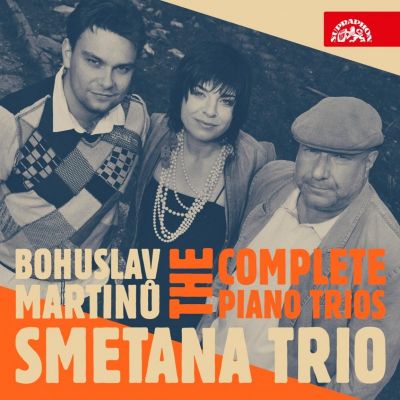 In the category of instrumentalists Mahan Esfahani also received the award for his album with JS Bach’s Goldberg Variations. Harpsichordist Mahan Esfahani is a student of prof Zuzana Růžičková and made his debut in Czech Republic within Bohuslav Martinů Days 2016.