Another volume of the Bohuslav Martinů Complete Edition is out!

Another volume of the Bohuslav Martinů Complete Edition (BMCE) with four cantatas on texts of Miloslav Bureš has been released. BMCE is a project realized in collaboration with the publishing house Bärenreiter, Bohuslav Martinů Institute and with the financial support of Bohuslav Martinů Foundation, The Czech Science Foundation and the State Fund for Culture of the Czech Republic. The new volume is edited by Vít Zouhar. 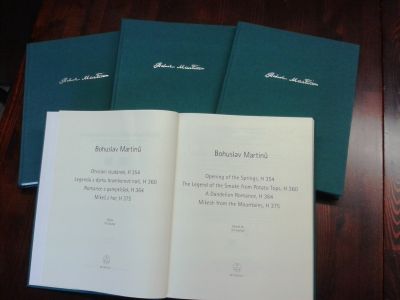 The four chamber cantatas on the texts of Miloslav Bureš originated in a period of intense creative activity in the years 1955–9. Bohuslav Martinů completed a number of important works at that time, including The Epic of Gilgamesh, H 351, and The Greek Passion, H 372 I and II. Although the four cantatas contained in this volume are thematically and linguistically connected to Czech culture, they greatly surpass the narrow boundaries of their regional context. The motives of homecoming and searching for one’s identity appear in the operas, cantatas, choral works and song cycles of Bohuslav Martinů from the outset of the 1930s. The methods of composition used in the cantatas also build on the folkloric bases mentioned by the composer from that time onward. The dramaturgy, subject matter, themes, and treatment correspond to his concept of modern musical theatre. Bureš’s loosely interwoven borrowings from Czech folklore and his stylisation with the archetypes of rituals and legends was undoubtedly one of the main reasons why Martinů was so strongly affected by the poet’s verses, why he kept coming back to them, and why he set them to music.

The critical edition eliminates numerous minor errors, inconsistencies, and solutions contained in previous editions (the addition of missing texts, vocals, dynamics, tempo changes, etc.) that were not based on the intentions of the composer. It reflects a number of documents that were considered lost or missing (textual sources, unknown correspondence of Bureš, etc.), and these newest discoveries help illuminate the creation, performances and contemporary context of the cantatas.