Director of the Bohuslav Martinů Foundation 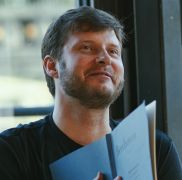 
Irvin Venyš is one of the most progressive performers in the Czech music scene. He is highly popular as both a soloist and a chamber musician thanks to his sweeping interpretive scope, from “classical” music and folklore to jazz and the demanding works of the 20th and 21st century. He collaborates with numerous contemporary composers and actively participates in premieres and performances of compositions by authors both domestic and foreign. He regularly records for Czech Radio, Czech Television, ORF, Mitteldeutsches Rundfunk NAXOS, and the labels Arco Diva, Supraphon. His latest CD with the Epoque Quartet, Komp(l)ot, was released by his own new label, Irvin Classics. He teaches the clarinet at the Academy of Performing Arts in Prague, where he also serves as Vice-Dean for Pedagogy Affairs, Science, Research, Innovation and International Relations. He co-founded and continues to organise the culture-education project Prague Clarinet Days and the Concert against Totalitarianism, which commemorates the anniversary of 17 November and the persecution of artists by totalitarian regimes.