New book on Bohuslav Martinů by Patrick Lambert is out!

New book MARTINŮ IN HIS TIME - THE RECORDED LEGACY: A Biographical Survey of the Early Recordings by Patrick Lambert has been published (in English). This thoroughly-researched survey of the early recordings of Bohuslav Martinů’s serves not only as a catalogue for those interested in the recorded legacy, but also as a source of biographical detail, much of which has previously been inaccessible to English readers. Recordings, often of historical importance, are placed in the context of the composer´s life and career. The study is divided into five chapters, beginning with the pre-war period in Paris where the first recordings were made. 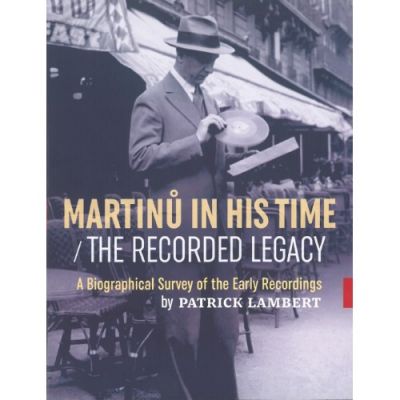 What I appreciate most is an insightful view of a internationally-renowned expert on the work of a Czech composer, taken from the natural distance it was being created at. Yet the author provides a full and excellent reconstruction, and explains details of Bohuslav Martinů´s life that even local musicologists sometimes find difficult to grasp, for instance the politically-motivated turnover in the Czechoslovak critics´ perception on the work of Martinů that occurred around the tumultuous February 1948.
Martin Flašar, January 2016

In sum, this is a critically important publication by an excellent writer and thinker. It provides a real model for how to present information about music and musicians to a broad audience, while at the same time fulfilling all the expectations of more scholarly work. Lambert’s work uses recordings to illuminate the composer in a new way that both deeply thoughtful and a genuine pleasure to read.
Michael Beckerman, January 2016

The Institute has only occasionally ventured into publishing, but I hope it will continue to sponsor, encourage, assist with, and publish important work such as this study by Patrick Lambert. It is a supremely well-written and fully documented text that fills a large gap in the study of Martinů’s music.
Robert Simon, January 2016

The book is already available for purchase on our e-shop. The whole review by Michael Beckerman on this book will be published in the next issue of the Martinů Revue.