Easy Piano Pieces and Dances has been published 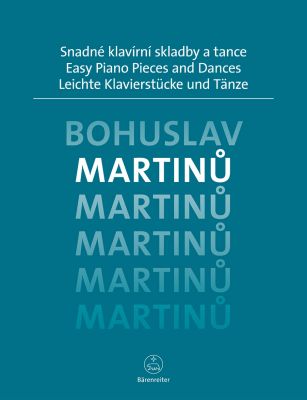 Editor of the album Lucie Harasim Berná wrote about discovery of Crotchets and Quavers in older issues of the Martinů Revue, you can read some of it below. More about Martinů Revue here.

After many years of systematic work, the research into Bohuslav Martinů’s œuvre has brought with it an ever-increasing number of discoveries and surprises. In the previous issue of Martinů Revue there was an article about the recent discovery of the ballet miniature Les mains in the archives of the National Theatre in Prague. Now, a cycle of piano etudes that had been deemed missing has been unearthed in archives in Brno. In the autumn of 2011, Mr Ondřej Pivoda, an employee of the Music Department of the Moravian Museum in Brno, informed me that he had found a copy of piano pieces that could be by Bohuslav Martinů. After examining the source, we arrived at the conclusion that it is the piano cycle Crotchets and Quavers, H. 257, dating from 1937. The work was also mentioned by Miloš Šafránek in the list of compositions in his monograph on Bohuslav Martinů (London 1962). Further evidence of the pieces’ existence can be found in Martinů’s correspondence with the publisher Melantrich and Karel Šebánek from 1937 and 1938. In his letter dated 25 May 1937, Martinů even directly assures the publisher that he is “sending the commissioned compositions: the Sonatina for Violin and Piano, the Intermezzo for Violin and Piano and Crotchets and Quavers.” Yet the latter piece has never been published by Melantrich.

The complete title of the cycle is “Crotchets and Quavers. Instructive Exercises with Alternating Times. (Advanced Level)”, or at least this is how it reads on the title page of the copy written in someone else’s hand that is deposited at the Moravian Museum in Brno. The cycle has four parts, Moderato – Poco Allegro – Andante – Allegretto, and none of them exceeds two minutes in duration. Crotchets and Quavers is a valuable set of miniatures not only within Martinů’s piano works, but within the literature for the piano. Martinů clarified the point of the little pieces in the title itself – in all parts of the cycle, quavers really are the smallest rhythmic value, alternating with crotchets and exceptionally with half-notes. Yet the player must cope with frequent or constant variation of metres (2/4, 3/4, etc.).
(...) 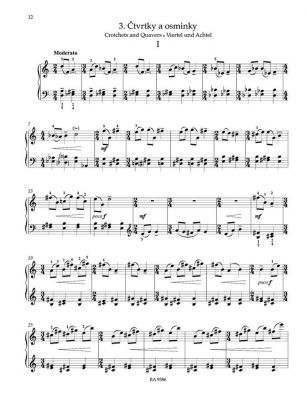