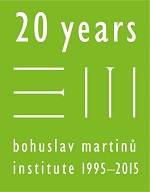 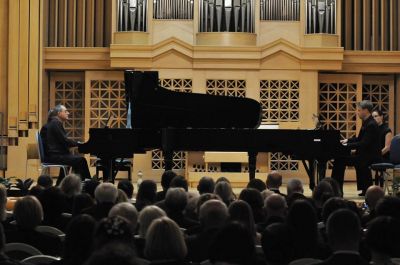 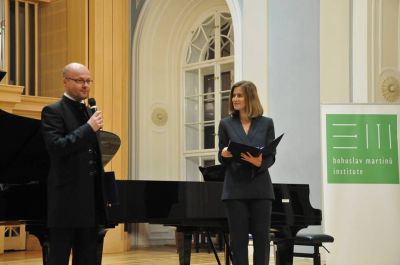 And how was the 1st Benefit concert?  Martinů without a tail-coat The first benefit concert in support of the Bohuslav Martinů Institute took place on 18 December 2015 at the Martinů Hall in Prague. It was an extraordinary event in many respects. The concert was part of the programme of the annual Bohuslav Martinů Days festival, founded in 1995 at the behest of the composer Viktor Kalabis. The concert was organised by the Bohuslav Martinů Foundation. Martinů never accepted the totalitarian regime in his homeland, and the Communist authorities responded by condemning his music to silence. The majority of his works have thus remained scattered around the world. The Bohuslav Martinů Institute has been seeking out the composer’s pieces, exploring and making them available, with its ultimate aim being a complete edition. This task entails an enormous amount of painstaking work, with the major figure behind these activities being the musicologist and composer Aleš Březina, who is currently Director of the Bohuslav Martinů Institute. Following a certain time of seeking the ideal manner of approach to Martinů’s oeuvre, the Foundation and Institute seem to me to be the two most competent organisations to pursue this objective. The benefit concert was extraordinary owing to its quality and, particularly, its programme and atmosphere. The performers succeeded in conjuring up a sparkle of moods and musical invention, which lit up the occasion with natural ease and joyous expectations of the unexpected. After a significant delay, the concert was launched by the presenter Emma Smetana, whose contribution was the one thing I could have done without. By contrast, the soul and engine of the evening was the versatile Italian musician Enrico Pieranunzi (b. 1949) – a pianist, jazzman, composer, organiser and teacher, evidently enchanted by the magic of Martinů’s music. He has been active in promoting and performing Martinů, who has inspired him in his numerous jazz creations that lay bare the affinity of Martinů’s world to the world of jazz. Within contemporary jazz music, Pieranunzi is one of the leading representatives and creators of new worlds. In 1989, 2003 and 2008, he received the “Top Jazz” prize from Italy’s prestigious Musica Jazz magazine; in 1997, he won the Django d´Or for Best European Musician. The US’s Down Beat named his album “Live in Paris” the best CD of the 2000 – 2010 decade. These accolades notwithstanding, Pieranunzi acts very civilly and naturally, emanating a self-confident humility and kindness. He comes across as unpretentious, possessing the quintessential Italian charm and refinement of taste, and though clad in a simple sweater, his presence on the stage was far more impressive than that of many others donning a tailcoat. His musical performance and witty verbal commentary were similarly impressive. And his melodious, Italian-accented English was a joy to listen to... In the spirit of the jazz tradition, and with a typically Italian nonchalance, Pieranunzi began right away by supplementing the formal program with some of his own improvisations and compositions. I am convinced that by doing so he markedly enriched and diversified the concert. The formal programme featured Martinů’s Three Czech Dances for two pianos, H 324. Pieranunzi invited along as a partner the similarly appealing pianist Robert Kolínský (b. 1970), a virtuoso who has continuously championed Martinů’s music. He was born and lives in Switzerland, where his parents fled from Czechoslovakia in the wake of the Soviet invasion in 1968. Kolínský has won several competitions and for 20 years has served as artistic director of the Martinů Festtage in Basel, where he also heads his chamber Ensemble Basilisk. Pieranunzi and Kolínský’s performance of this rarely-performed work was characterized by perfect ensemble and was animated by the pulsating spark of the jazz flame. Following Pieranunzi’s intriguing introduction, the two artists gave the Czech premiere of the Italian musician’s arrangement of George Gershwin’s celebrated An American in Paris. This constitutes an example of the blending of American and European musical ideas for which Martinů was known. In this case, the flame of jazz and the spirit of blues blended with the European influences clearly and effectively. Another Czech premiere provided by Pieranunzi was that of his piece Duke’s Dream for solo piano, combining elements of classic jazz improvisation and blues into the depths of classical music. The extraordinary concert culminated with Pieranunzi’s jazz improvisations on themes of Martinů compositions, presented under the title Autour de Martinů. I would venture to say that of all the tributes and splendid concerts that were dedicated to last year’s Martinů anniversary, this evening may well have pleased the composer the most. Pravoslav Kohout