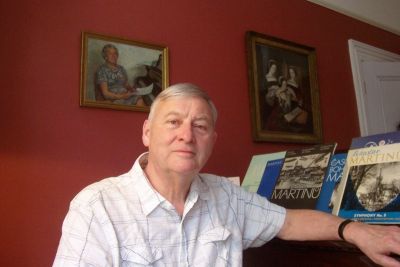 On reaching this milestone, Patrick feels that he should be counting his blessings; important among them being the joy and enrichment that Martinů’s music has given him over the years. He also considers himself fortunate to have had inspirational parents. From his half-Irish father, an analytical psychologist, he gained an understanding of the human condition, and a moderate dose of Celtic blood. From his mother Barbara Kirkby-Mason, a pianist and composer well-known in the piano teaching world for her beginner’s books, he gained his love of music. Earliest musical memories are of drifting off at bedtime to the distant sounds of her piano playing and of being allowed to operate the gramophone and being thrilled by Dvořák’s New World Symphony magnificently performed by the Czech Philharmonic on pre-war HMV 78s.

Patrick was born on 15 June 1943 in Salisbury and has lived in London since the early 1950s. He undertook his university education at Trinity College Dublin, where he became Chairman of the Gramophone Society. His first encounter with Martinů’s music was through the acquisition of Karel Ančerl’s LP recording of the 5th Symphony and, fired by enthusiasm, he successfully campaigned for this work to be included in an invitation concert given by the RTE Symphony Orchestra in the TCD examination hall.

Joining the BBC in September 1968, Patrick first trained as a studio manager, but after 5 years he joined the production side, rising to the position of senior producer in Radio 3’s Music Department and also presenting programmes on air. In 1983, he received a Sony Radio Award for the “best classical music programme” of that year. Patrick became known for championing Slav and especially Czech music, creating a number of series featuring conductors such as Talich and Kubelík and introducing many Czech composers little known at that time, such as Suk, Novák and of course Martinů, whose music was only begrudgingly acknowledged by the programme controllers of the day.

Although Patrick had visited the Prague Spring Festival in the early 1960s, he gained a deeper insight into the Czech world after meeting his future wife Jaroslava who left her country in the wake of the Soviet-led invasion in August 1968. Since their marriage in December 1970, Patrick has been a regular visitor even during the grim period of ‘normalization’. Over the years he has built up a large archive of recordings and books on Czech music. His study door bears the inscription “Český ráj” (Czech paradise)

As a result of his radio series profiling Paul Sacher’s commissions, Patrick was invited by the Swiss conductor to Schonenberg in June 1979 to inspect the original manuscript of the Double Concerto and to see Martinů’s grave on his estate. Soon after his visit the composer's body was disinterred and removed to Polička, much against Sacher's wishes.

For the Martinů centenary in 1990, Patrick presented a four-part radio series “A View from the Tower” and produced studio recordings of the Concerto grosso and Concerto for Two Pianos and Orchestra for transmission on the day of the anniversary. That year he also presented a paper “Martinů’s search for truth and meaning of life” at the Martinů conference held in Prague in May and, five months later, “Desperately seeking Julietta” at the conference organised by Washington University in St. Louis. Both papers were published in the journal of the Dvořák Society of G.B. On a subsequent visit to Prague, he was informally presented with a Martinů medal.

Since his retirement, Patrick has written numerous reviews for musical journals, programme notes and CD booklets, as well as giving pre-concert talks. He has been an enthusiastic supporter of the IMC since its inception and has been a regular contributor to the Revue. He has recently completed a comprehensive survey of historic Martinů recordings for Classical Recordings Quarterly. Last November, he participated in a broadcast on Czech Radio 3-Vltava to mark the 90th anniversary of the BBC.

We wish him continuing happiness with many more birthdays to come.